Many changes have taken place in the field of fixed telephony communication solutions in recent years. Fixed telephony as a service is now offered by a large number of service providers, Voice over IP has more users in the business market than traditional PSTN connections and the number of parties that deliver their own communication servers to end users is reduced by acquisitions and dropouts. Looking at the Belgian business locations that still have a fixed telephony communication solution at their own location, it is clear that three names are the most prominent: Mitel, Alcatel-Lucent Enterprise (ALE) and Unify (Siemens). We come across communication systems from these vendors at 19, 18 and 17 percent of Belgian business locations, which indicate that they still use a solution at their own location. All other vendors follow at some distance. This emerges from a Smart Profile analysis based on 2,700 interviews with IT and / or Telecom responsible persons at Belgian company sites with 50 or more employees from both the public and the commercial sector. 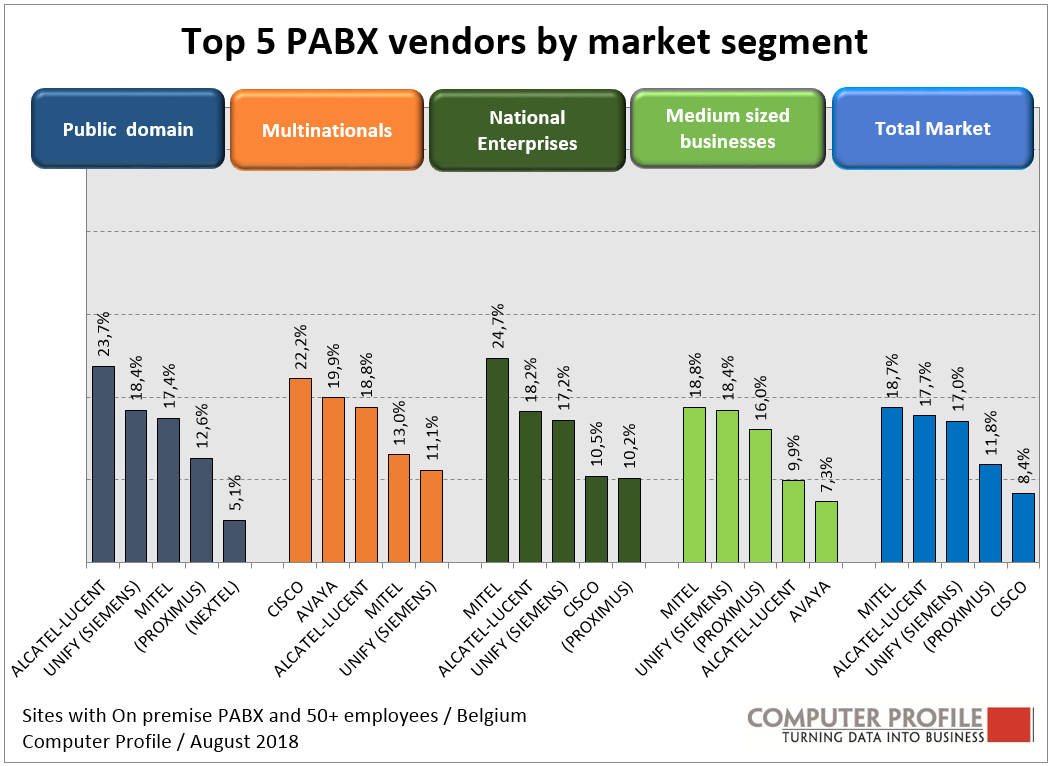 Further breakdown to market segments shows a number of clear differences for vendors and segments. In the public domain, ie government, education and healthcare, Alcatel-Lucent is by far the most common communication solution. At locations of multinationals, Cisco and Avaya play a more prominent role compared to other segments. Within the SME market, it is Mitel who takes the lead. In addition, we see a number of market players coming back who are not manufacturers of a communication solution, such as Proximus and Nextel. Both are prominent players on the Belgian market for telecom solutions and services, whereby they offer hardware for communication platforms through partners. For example, Proximus currently offers the on-premise communication solutions from Mitel. For Nextel, this currently concerns systems from Alcatel-Lucent and NEC. Since during the interviews the end user nevertheless refers to this supplier and not to the manufacturer, and in part it also concerns installations that may have been in use for some time (and other brands might have been used by these service providers in the past), these suppliers are, for completeness, shown separately.

If not only the use of an on-premise fixed telephony communication solution from a certain vendor (penetration) is considered, but also the capacity of the system in the number of extensions / workplaces is taken into account, then the picture below appears. Where we see that Mitel is the most common solution, we see that Alcatel-Lucent has the largest share in the workplaces / extensions. This is largely due to the fact that Alcatel-Lucent is a frequent supplier in the public sector where large government agencies have a major impact.

A similar situation is visible for Cisco and Avaya who appear relatively more often at locations of multinationals. This segment is also characterized by large locations with many employees. 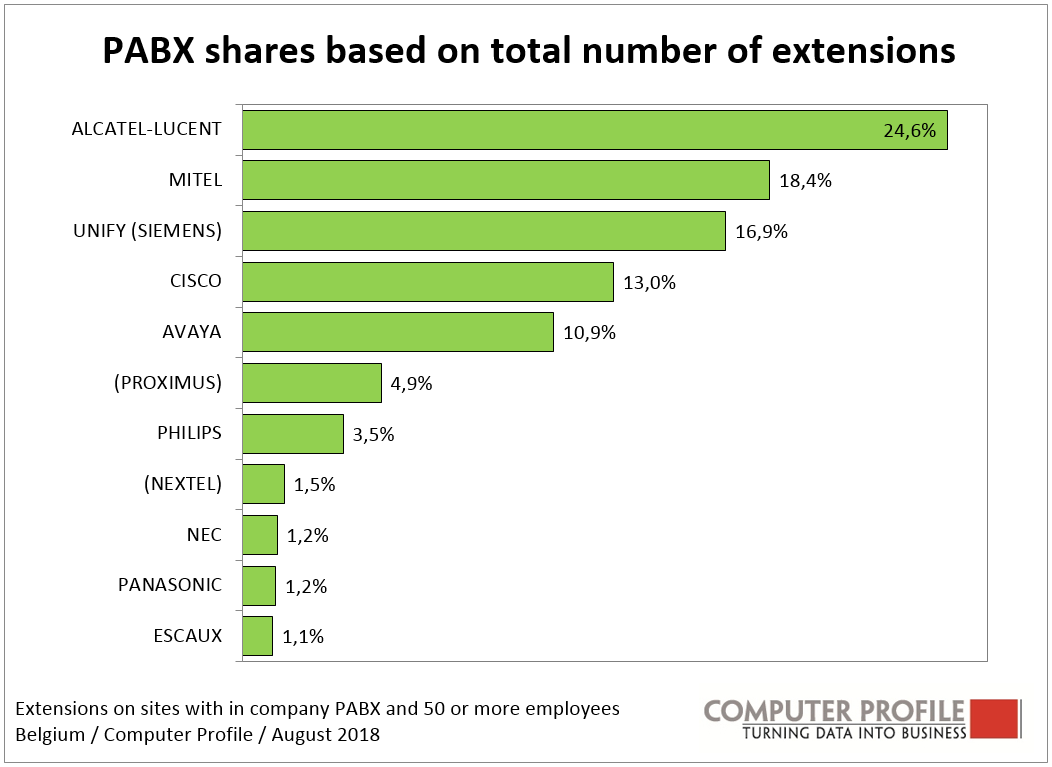 The systems with the average youngest age are the communication solutions from Escaux. With an average age just above six years, they on average are more than 2 years younger than the overall average. Behind the vendor name the number of systems on which the average age is based is shown in brackets. The greater the number, the more reliable the average found. Philips power stations are by far the oldest systems that are still being used. The average age is above 14 years. This concerns for the most part installations at government agencies. It is probably the older systems that will be the first to be considered for replacement. Whether that is again on location by a communication server, in the light of the increasing use of Hosted Voice, is at least doubtful. The figures for recent years seem to support that. In the 2016 analysis, the average age of an on-premise telephone exchange was 7.3 years in 2017, that was 7.5 years and now 8.7 years. Either the replacement of the telephone exchange is being postponed for longer and longer or instead of being replaced by a new solution on premises, people will use hosted voice. 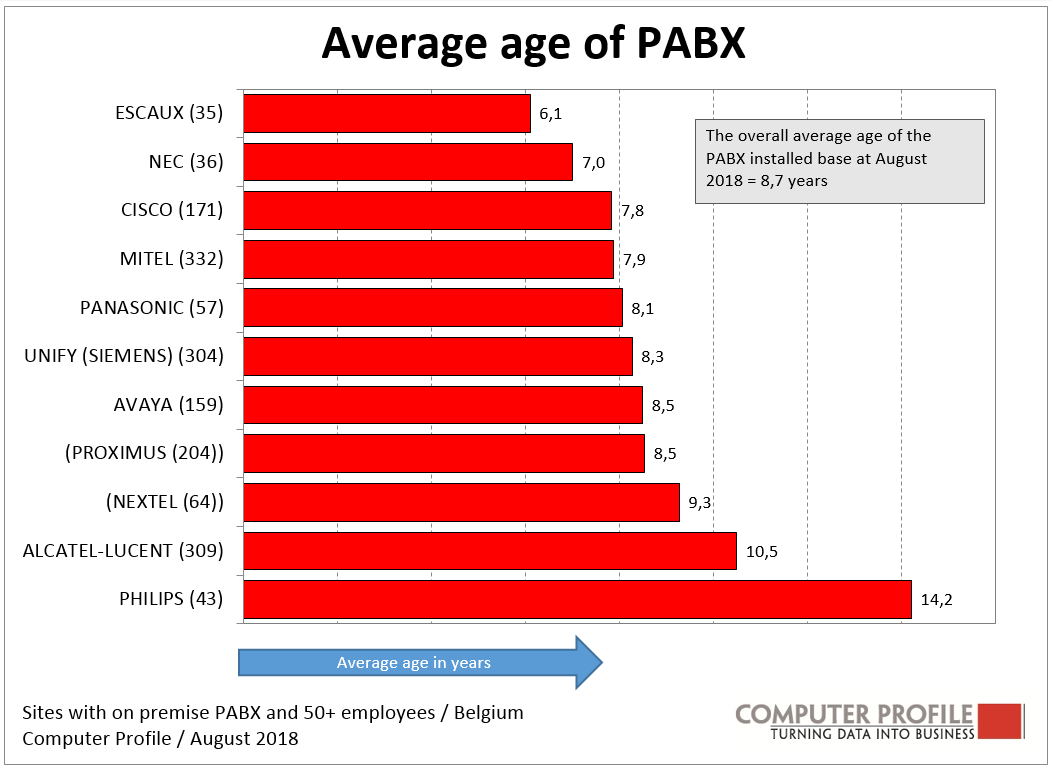 In addition to the use of a communication solution for fixed telephony, it has also been mapped out whether video conferencing solutions are being used at Belgian business locations. We are also seeing a decrease in the number of providers in this area, partly due to acquisitions and mergers. Three parties are still clearly visible. Polycom is the most common application. Of all the solutions found, approximately 46 percent concern a Polycom system. Cisco and Cisco Tandberg use more than a third of the systems (35%). LifeSize is the number three, with a 10 percent share. LifeSize is the party that has clearly won market share in the last six years, while the use of video conferencing solutions has been declining in recent years. At the moment, approximately 14 percent of the locations indicate that (Enterprise) video conferencing solutions are being used. Last year it was 16 percent, in 2016 it was 18 percent. The adoption and availability of online platforms has only increased in recent years. For example, many end users will already have Skype for Business functionalities through an Office365 account, but many other online video conferencing services are easily accessible and sufficient for many users. 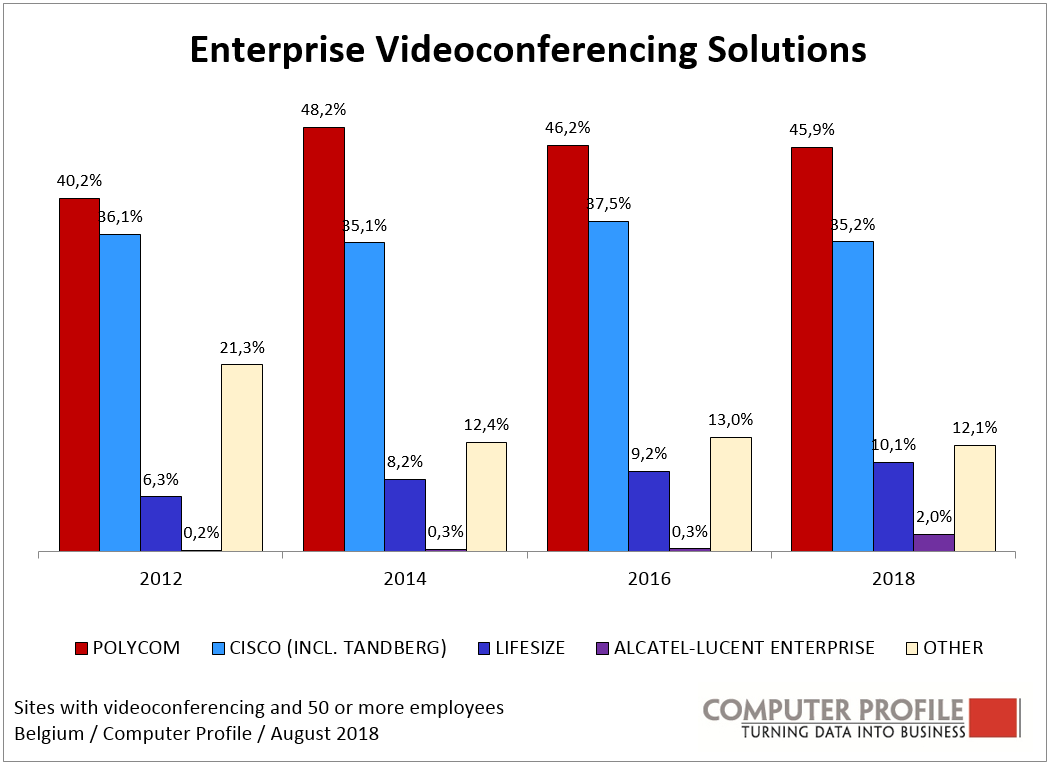 How to make a successful digital transformation
Scroll to top