Numerous changes in the field of fixed-telephony communications solutions have been witnessed in recent years. Fixed telephony services continue to increase in popularity, Voice over IP has become the standard and the number of parties supplying their own hardware to end users is declining as a result of acquisitions. For those business establishments in the Dutch business market that still retain an on-site fixed telephony communications solution, three names clearly stand out. Avaya, Mitel and Unify. Indeed, we encountered the communication systems of these vendors at 20 and 19 percent of the interviewed business locations respectively. Other vendors lag by some distance. These were the results of a Smart Profile analysis of approximately 6,000 interviews conducted with IT and/or telecoms personnel at Dutch business establishments with 50 or more employees. 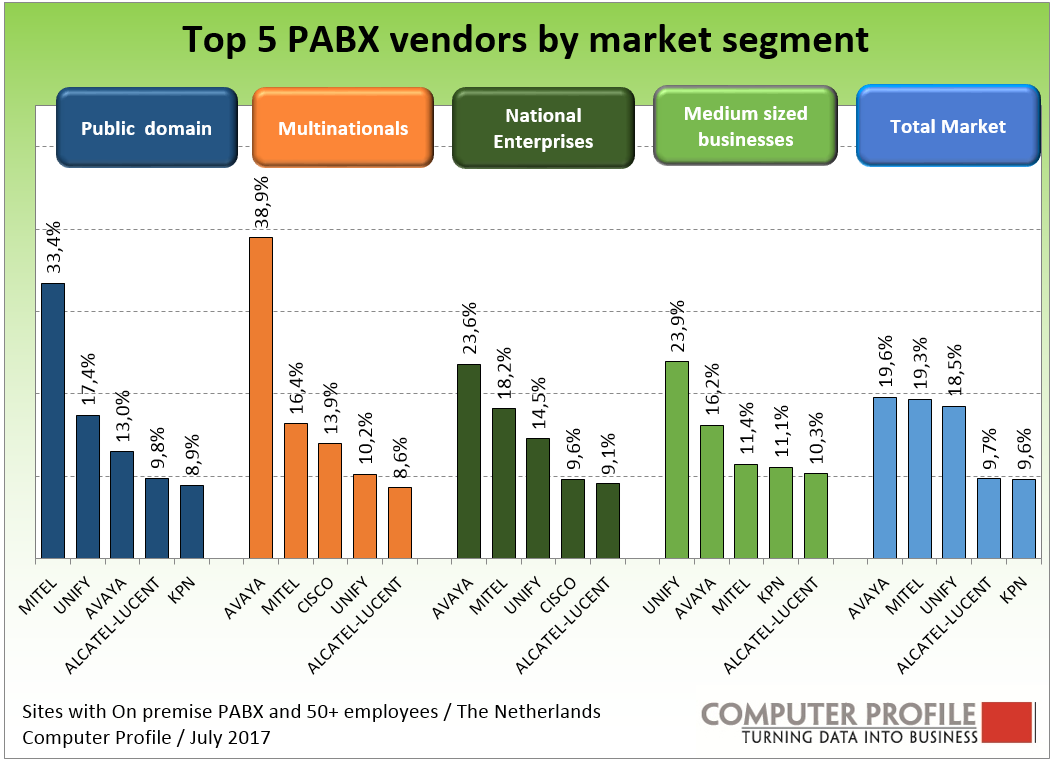 A further market segment breakdown reveals some distinct differences for the various vendors. Avaya, for example, enjoys an above average representation within the multinationals segment; Global Fortune 500 and Forbes2000 sites. Mitel boasts a strong presence in the public domain. Within this public domain, which incorporates government, education and care, Mitel scores approximately twice as high as its closest competition (particularly, in government and care). Unify has an above-average footing in education. Unify also scores extremely well in the “Medium- sized’’ business segment (50-250 employees).

However, when the use of a particular vendor’s on-premise fixed-telephony communications solution (penetration) is not examined in isolation, and the capacity of the system based on the number of extensions is additionally considered, then the following picture emerges. Similar, yet with obvious differences.

Again, there is zero difference between Mitel and Avaya. Both enjoy an approximate 22½ percent share of the total. Unify now trails somewhat behind. We observed that this vendor has a strong presence in predominantly smaller companies. This translates directly back into the share based on extensions.

Cisco makes a small leap and is number three based on its share of the total number of extensions. 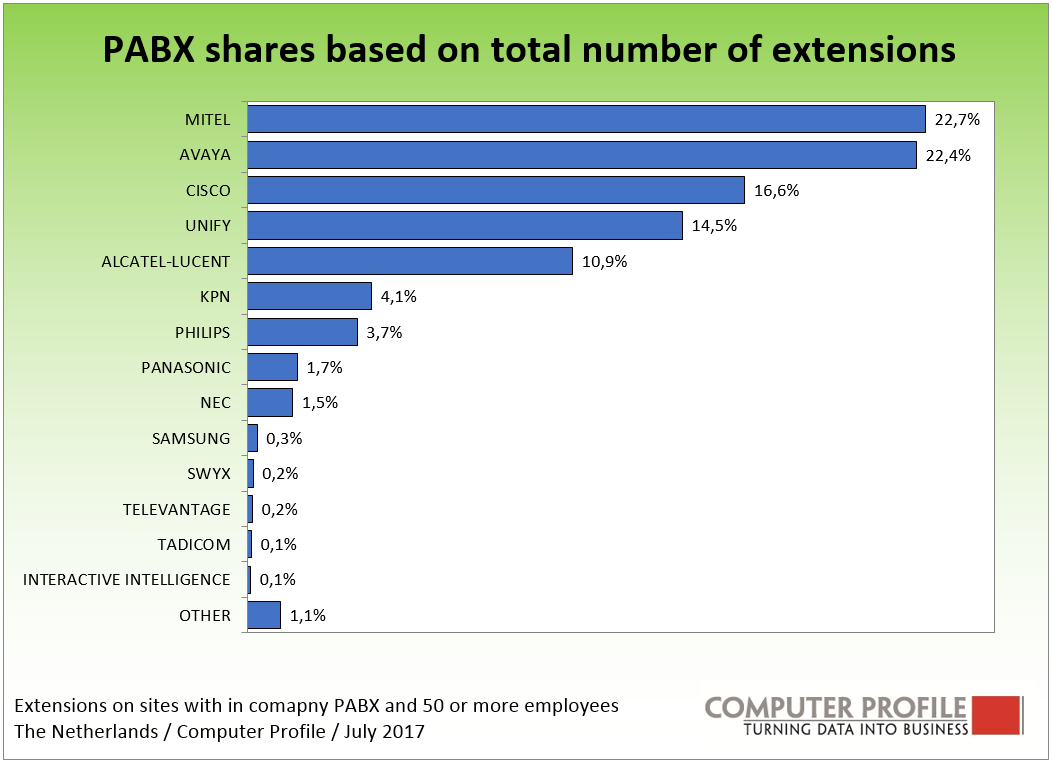 In addition to known vendor fixed telephony communications solutions, a significant number of the business establishments interviewed indicate the use of a KPN system. These are hardware vendor systems supplied via/by KPN. They can include systems from multiple vendors, such as Alcatel-Lucent, Mitel and Avaya. Thus, the 4 percent share indicated for KPN can, in fact, be attributed to these manufacturers.

Average age of the PABX

Fixed telephony communications solutions boast a relatively long life cycle. The average age of the installations encountered was approximately eight and a half years. Thus, manufacturers who, in recent years, sold few new systems to the business establishments interviewed exhibit a higher average age, whilst those who sold more installations in recent years exhibit a lower average age. The systems from Cisco, Avaya and Mitel boast the youngest average age. In comparison to previous years, 3CX is a new name in the figure below. In order to outline the average age of a telephone exchange, we require at least twenty interviews for the brand concerned. 3CX exceeds this threshold for the first time.

The oldest systems in use are those of KPN, Samsung and Philips. Such systems are likely to be the first to qualify for replacement. Whether that’s via an on-site communications server is, at best, questionable, in light of the increasing use of Hosted Voice. 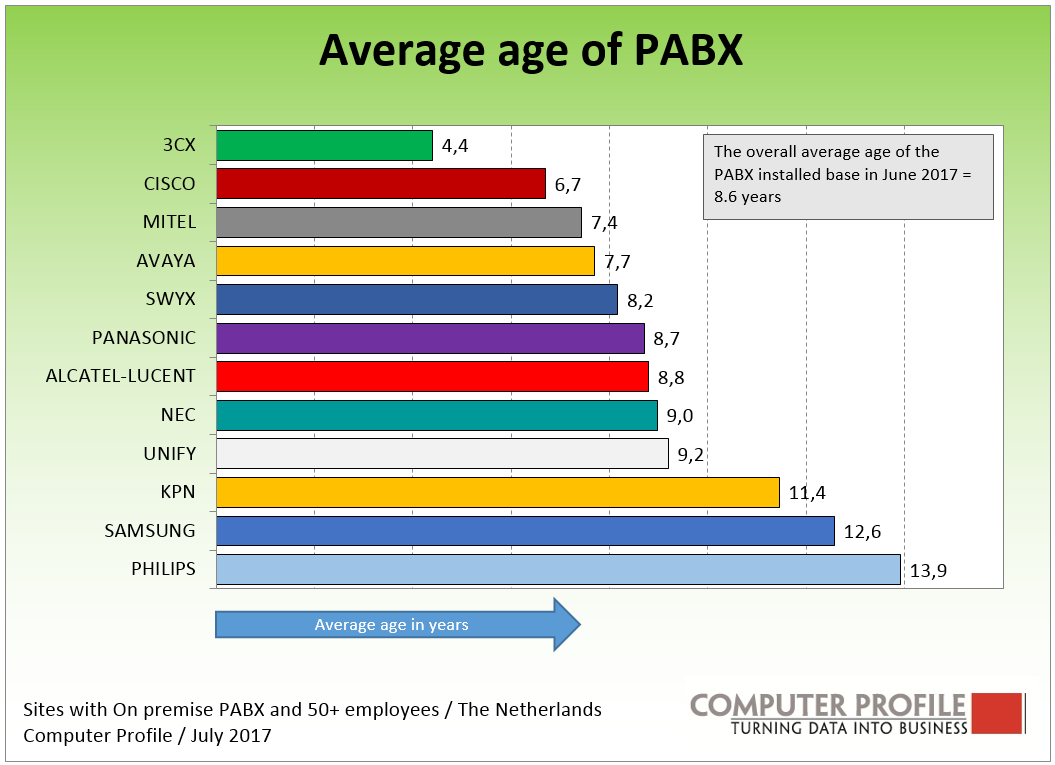 A telephone exchange/communications server is still in place at approximately half of those business establishments that had something to say about their fixed telephony solutions. Around 17 percent of these sites indicate using their own communications server located at another site (data centre or affiliate site). Thus, there is no PABX solution at the remainder (approximately one third) of the sites. These use a solution supplied by a service provider instead. Whilst this can be a hosted voice solution, the fixed telephony solution may also fall under an outsourcing contract. When examining the use of a local telephone exchange, two segments immediately jump out; wholesale and industry. These invariably still choose for an on-site system in the majority of cases. Within government and care, we typically see that the communications solution operates from a central location. 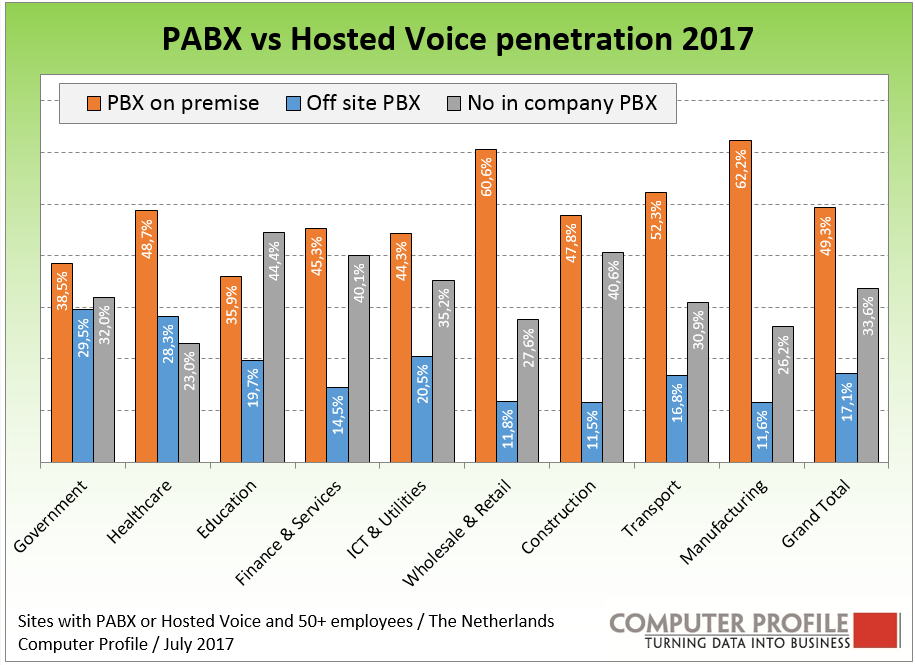