Fortinet shows biggest growth, but at a distance

The Belgian market for network equipment is still strongly dominated by Cisco, with HPE (Aruba) at some distance. Only in the hardware firewall area should Cisco leaves the number 1 position to Fortinet. We encounter Cisco network hardware at 7 out of 10 Belgian business locations. We encounter HPE (including Aruba Networks) at almost a third of the company locations. All other manufacturers are encountered no more than once in ten locations. This emerges from a market analysis by Smart Profile, a specialist in data-driven marketing, in which 2,500 decision makers from Belgian organizations with more than fifty employees were questioned (public and commercial sector).

Cisco’s position in the entire network market – switches, routers, (hardware) firewalls and wireless – was still at a penetration of 77 percent of the target group in 2012, but has stabilized just above 70 percent in recent years. For HPE (Aruba) the use in the period from 2012 is always around 32 to 33 percent. Fortinet is the party from the top 5 that shows the most clear growth. We saw network equipment from this vendor in 4 percent of the locations in 2012, now it has more than doubled to 10 percent. Juniper and WatchGuard fell a few percentage points in the same period.

A closer look at the market segmentation shows some differences. For example, the use of Cisco is clearly the highest at business locations of multinationals. Cisco is relatively less common in the public domain and at medium-sized companies (50-250 employees). In those segments, there is therefore the most room for competition. 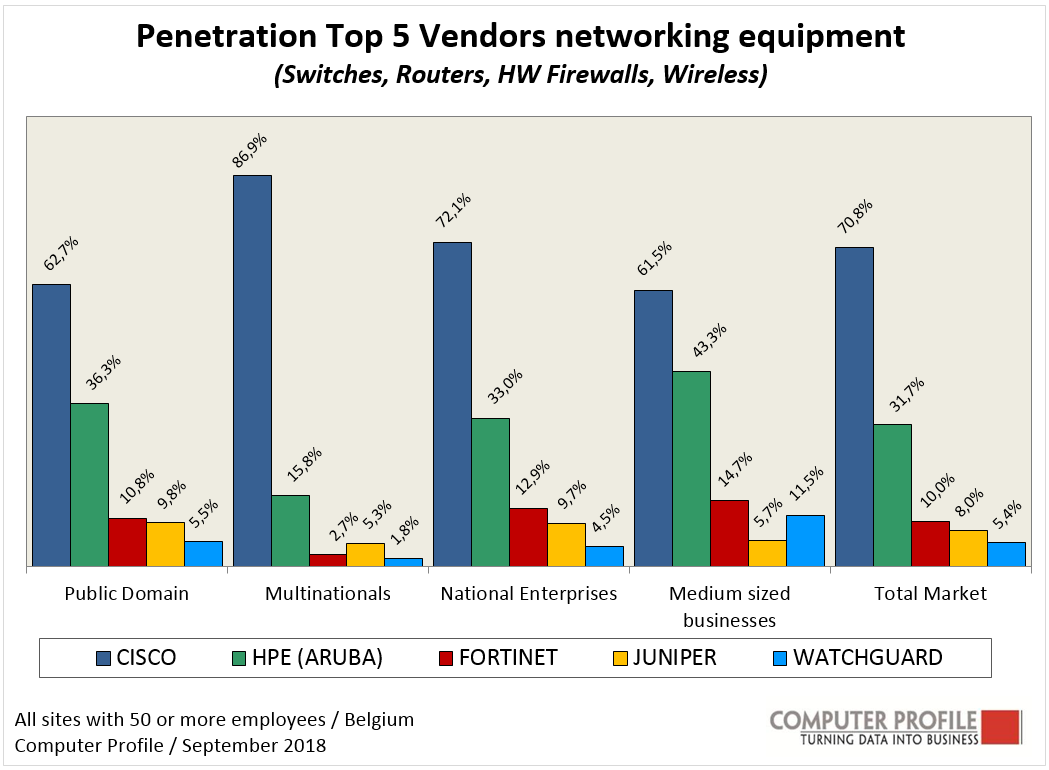 Switches are the most common form of network equipment. We encounter them at around 94% of the locations and this percentage has been at about the same level for years. When all listed switches are added together, it appears that almost half (49%) of all switches are Cisco switches. About 29 percent is an HPE (Aruba) switch. Alcatel-Lucent Enterprises (ALE) completes the top 3 with a 6 percent share. Avaya is behind this with 5 percent market share. All others have a share of less than 5 percent. The development from 2012 shows for Cisco that the share initially declined somewhat but remained almost unchanged in the last three years, while HPE (Aruba) has been gaining some share in recent years. 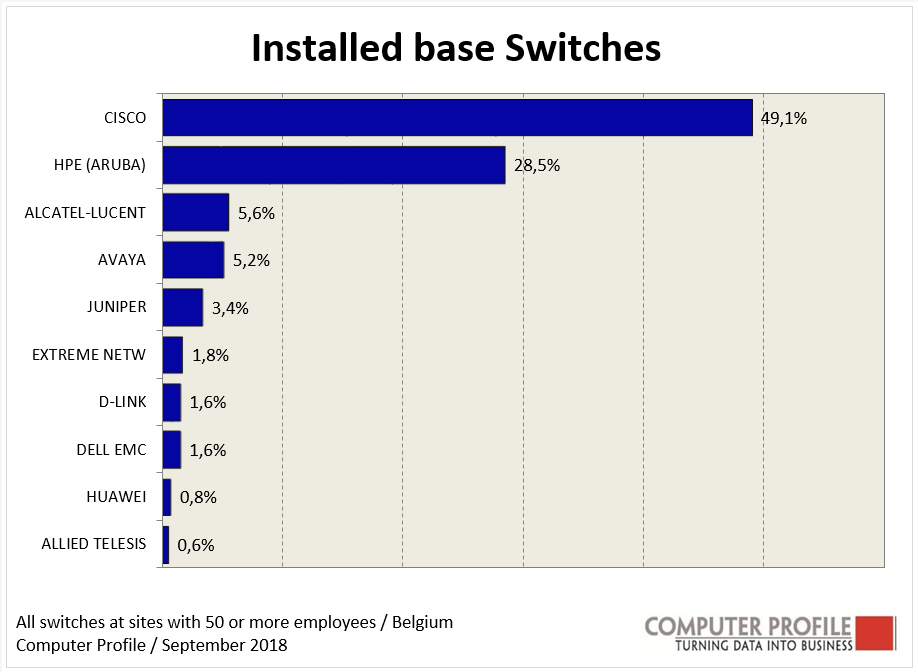 Proximus and Telenet, the odd ones out

The position of Proximus is special. Based on the answers given by the respondents, around 5 percent of the routers would be a Proximus router. Now Proximus itself is not a hardware manufacturer but supplies products from the technology partners. Because Proximus knows / knew several partners for network solutions, it is difficult to allocate the share shown here to a specific manufacturer. The same applies to Telenet, they too are not a manufacturer but a core provider of network services. 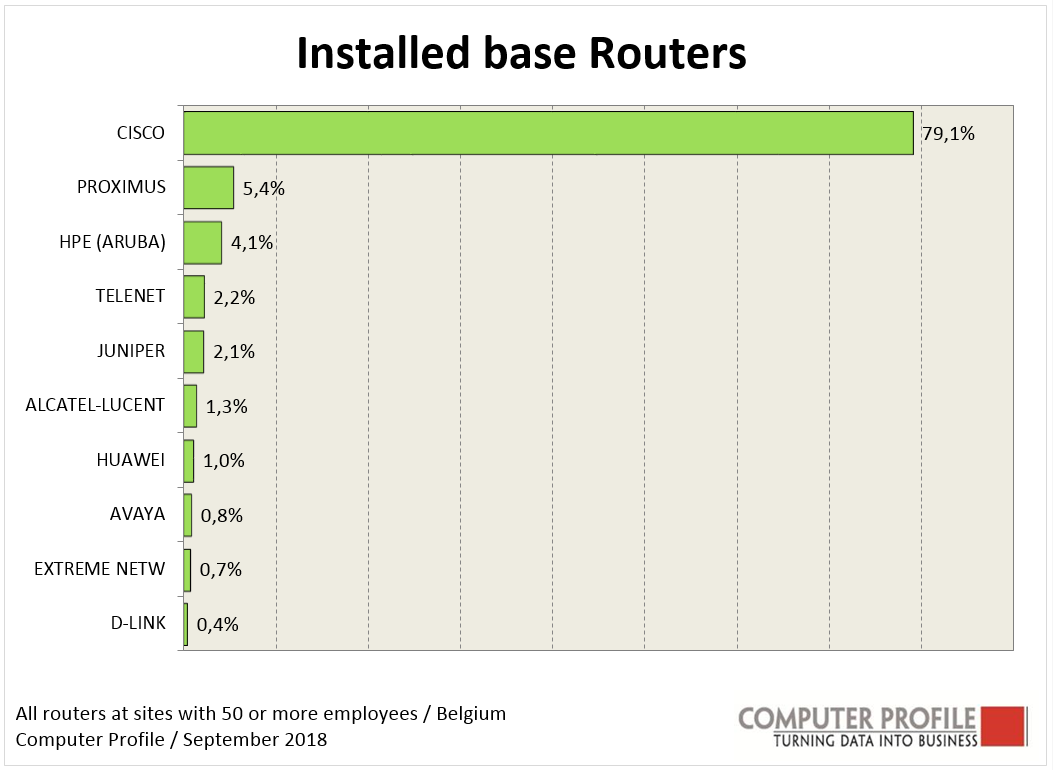 Of the listed network components, we encountered hardware firewalls in absolute numbers the least. About 45 percent of the locations will name hardware in this area in 2018, while this was around 54 percent 6 years ago. The image of the hardware used here is diverse. Fortinet takes the first place. Of all the hardware firewalls found, 20 percent are Fortinet products. Cisco takes the number two position here. But WatchGuard, Juniper, Check Point and Palo Alto also play a significant part in the total here. The trend line of the last 6 years shows a clear increase for Fortinet and Palo Alto, a small decrease for Cisco and a decrease for WatchGuard and Juniper. 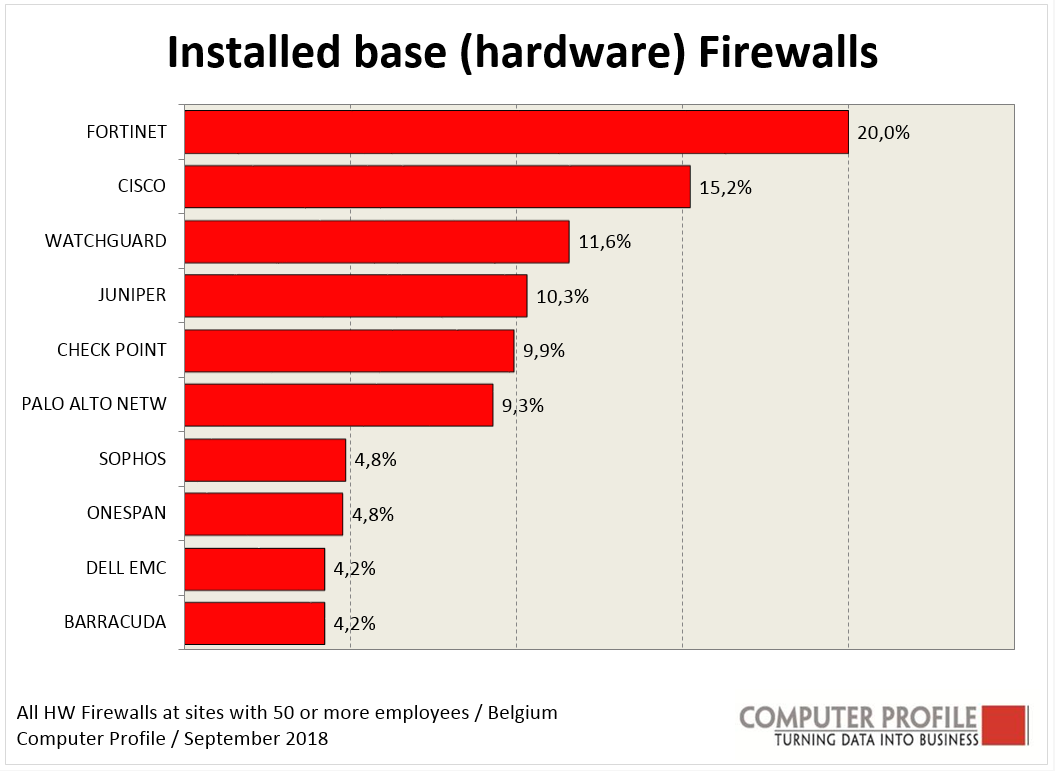 Finally, we come across wireless network equipment at around 72 percent of business locations. After a number of years of an increasing number of locations with WiFi equipment, this now appears to be declining slightly again compared to last year (74% penetration).

Of the total number of WiFi systems found, 58 percent are Cisco products. All other vendors have to settle for a significantly smaller piece of the WiFi pie. HPE (Aruba) and Aerohive still clearly stand out above the others with 10 and 9 percent of the total respectively. The trend line of recent years shows an increase in the installed base share for Cisco, HPE (Aruba), Aerohive and Ruckus. 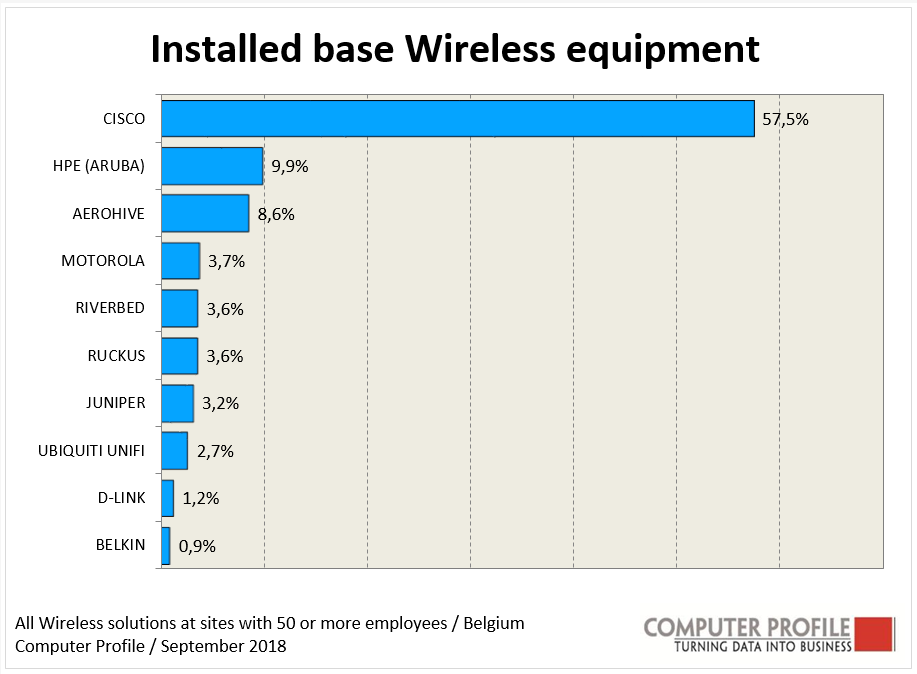 How to make a successful digital transformation