You are here: Home1 / Analytics papers2 / the Netherlands3 / Cisco’s share in networking equipment continues to decline

April 2018 – Cisco’s penetration rate in network equipment on the Dutch market dropped by 2.4 percent from the previous year, thereby continuing the downward trend initiated since 2015.  Cisco nonetheless is still the undisputed market leader with a penetration rate of 73.9%, followed by HPE/Aruba and Juniper with 35.1% and 7.5% respectively.* This is shown by a market analysis conducted by Smart Profile, a specialist in market intelligence, wherein nearly 5,000 decision-makers from Dutch organizations with more than fifty employees were surveyed.

In 2015 Cisco’s penetration rate in routers, switches, HW firewalls, and WiFi equipment was still as high as 80.5%. Since then, it has dropped by at least 2 percentage points every year. The penetration rate in networking equipment by HPE, inclusive of Aruba Networks, has also declined annually since 2012 (38.8% in 2012, compared with 38.1% in 2018).  The penetration rate of the number four player, Fortinet, rose to 6.5% during the same period. As a result, Dell EMC dropped out of the top four for the first time. 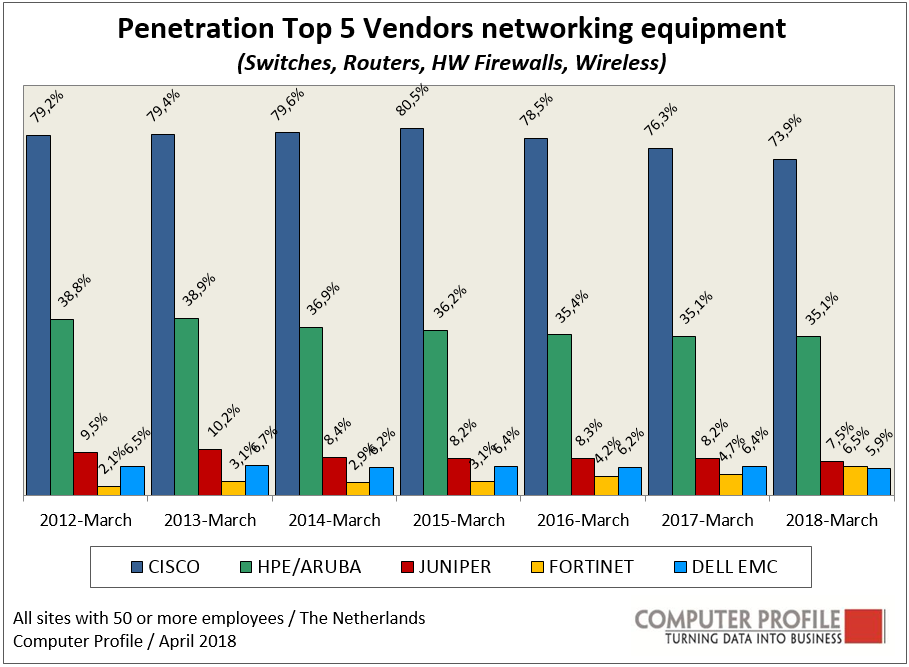 When we zoom in on the various types of networking equipment, it turns out that half (54.5%) of all switches are Cisco switches, and 30.2% are HPE/Aruba switches. Avaya rounds off the top 3 with 7.5%. All other brands do not exceed 2%. 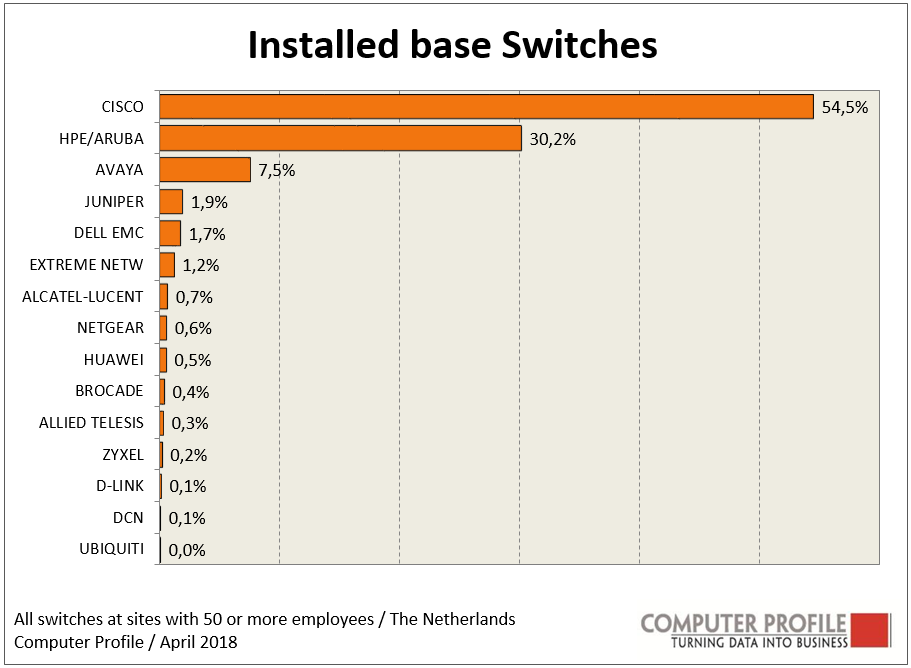 The same two players dominate the router market as well, with Cisco as the undisputed market leader (76.4% of all routers) and HPE/Aruba in second place (14.3%). Juniper (3%) is the only other player that scores above 1%. 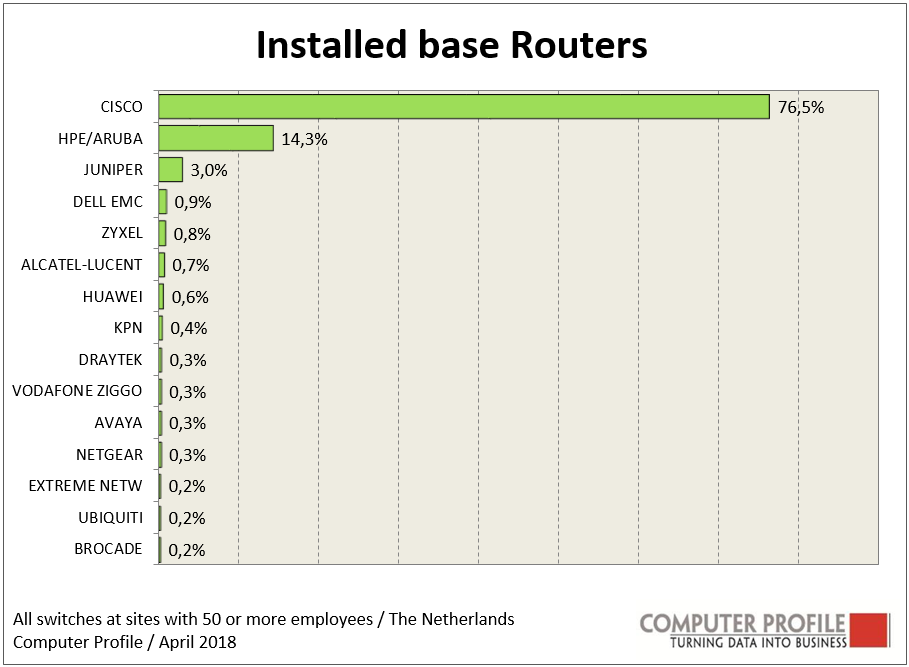 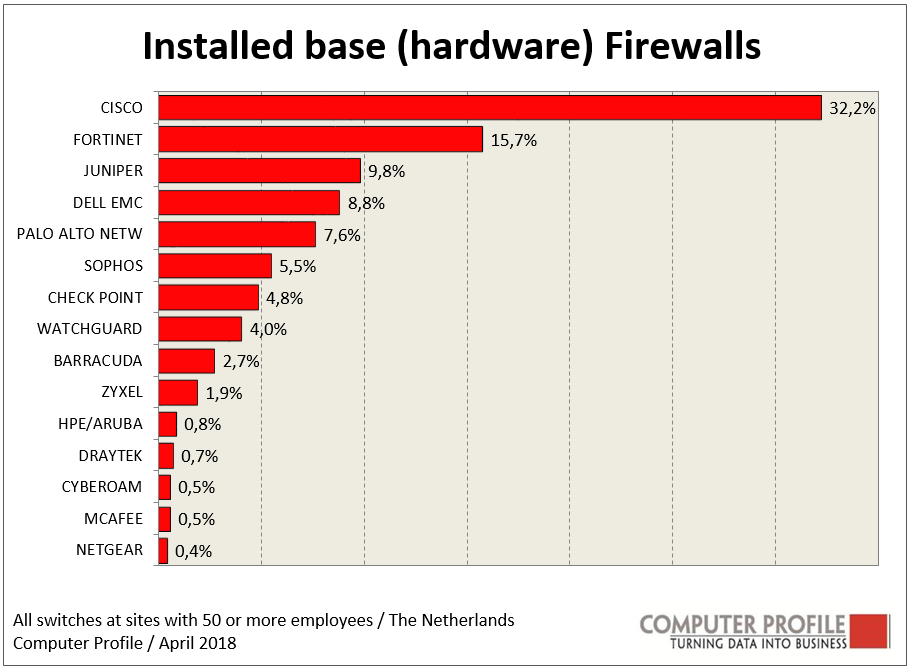 Cisco is also number one when it comes to WiFi equipment, with 52.5% of the installed wireless equipment in the Netherlands. Aerohive has registered a sharp increase in market share since last year (from 4.6% to 10.7%) to occupy third place, with HPE/Aruba (17.5%) at number two, thanks to the good performance of the Aruba Networks component. Juniper’s market has nosedived from 10.6% to 2.2%. 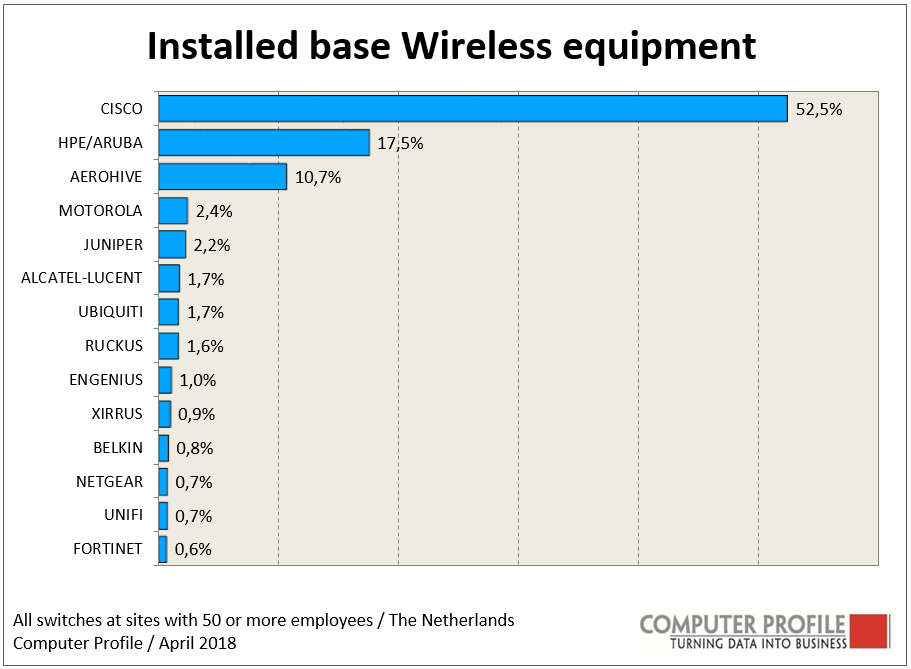 * Because one site or location can be using equipment from several manufacturers, the penetration figures indicated exceed 100%.