You are here: Home1 / Analytics papers2 / Belgium3 / Decline in the use of on-premise servers continues

Decline in the use of on-premise servers continues

The number of Dutch companies that have servers (mainframe, midrange and X86 servers) at their own location has again decreased in the past year. In 2010, no fewer than 94.6% of the companies had their servers on premise. In 2018 this percentage fell to 57.3% and this year it is less than half of the organizations with 45.6%. The same downward trend can be seen in Belgium. Last year, 83.9% of Belgian companies had their servers on premise, this year that is 74.3%. This emerges from a Smart Profile analysis of the server market for which more than 5,300 Dutch companies and 2,650 Belgian companies with more than 50 employees were questioned. The research further shows that HPE has a strong position as market leader in the Benelux server market. 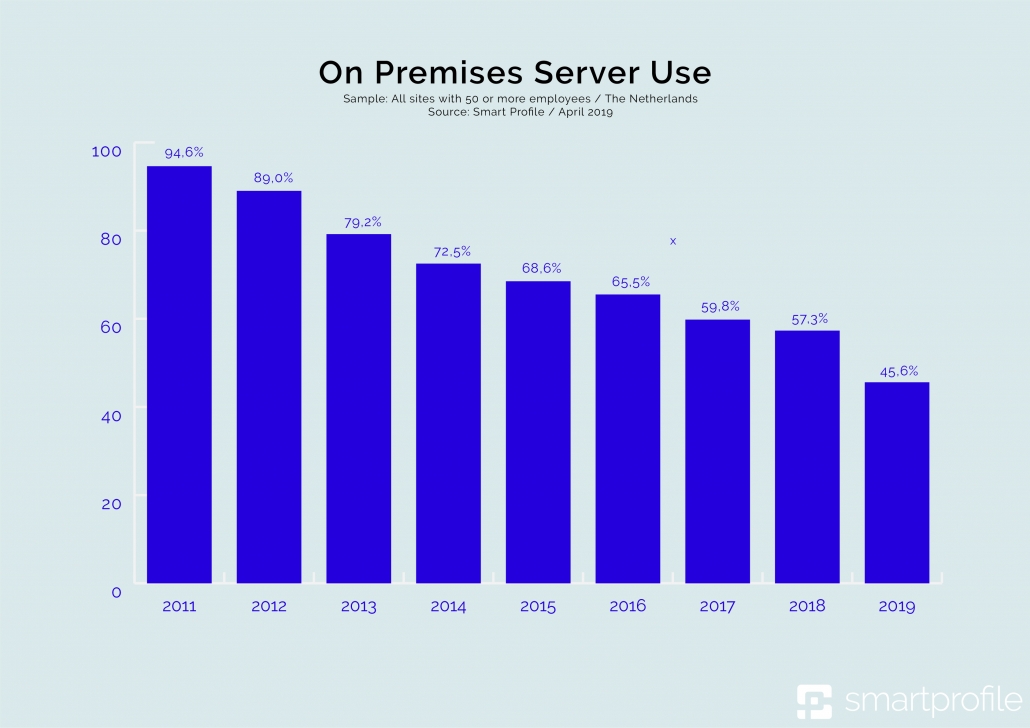 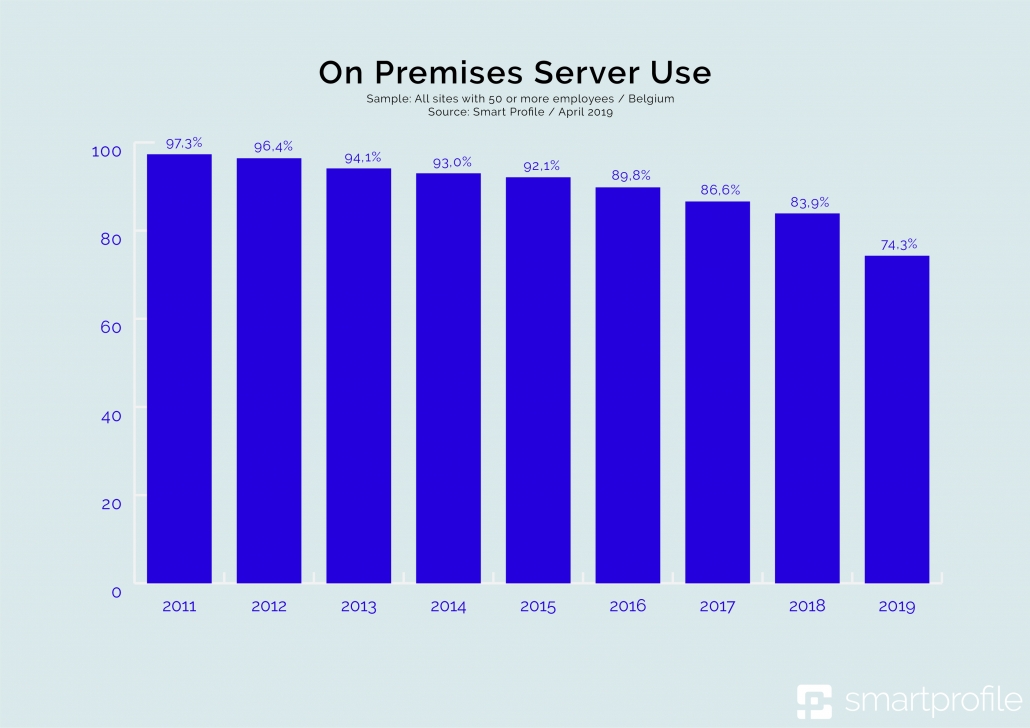 There are some clear differences between the Dutch and Belgian analysis. The number of Belgian companies that have servers at their own location has decreased in the past year, but is still significantly higher than in our country. In Belgium, for example, 74.3% of companies have their servers on premise compared to 83.9% in 2018. 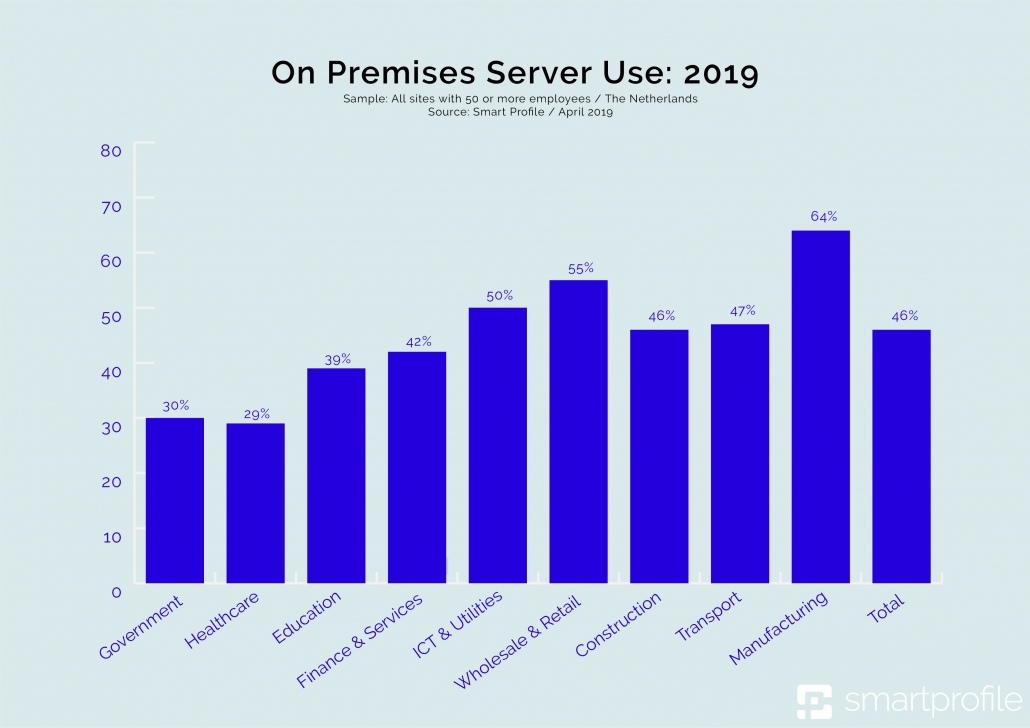 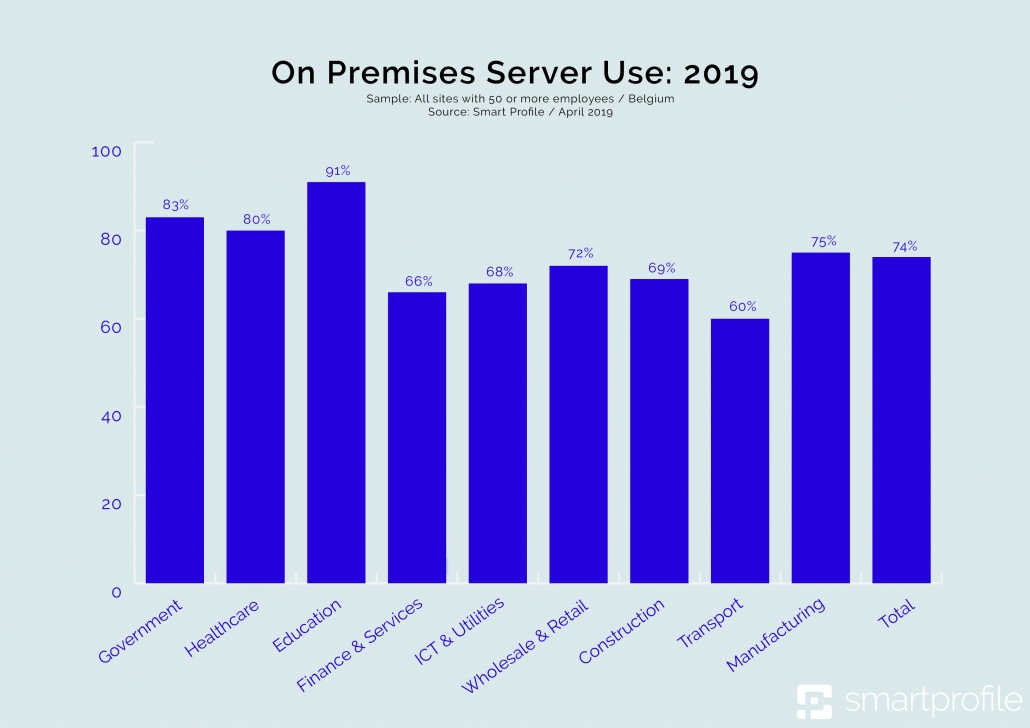 Declining use of high-end servers 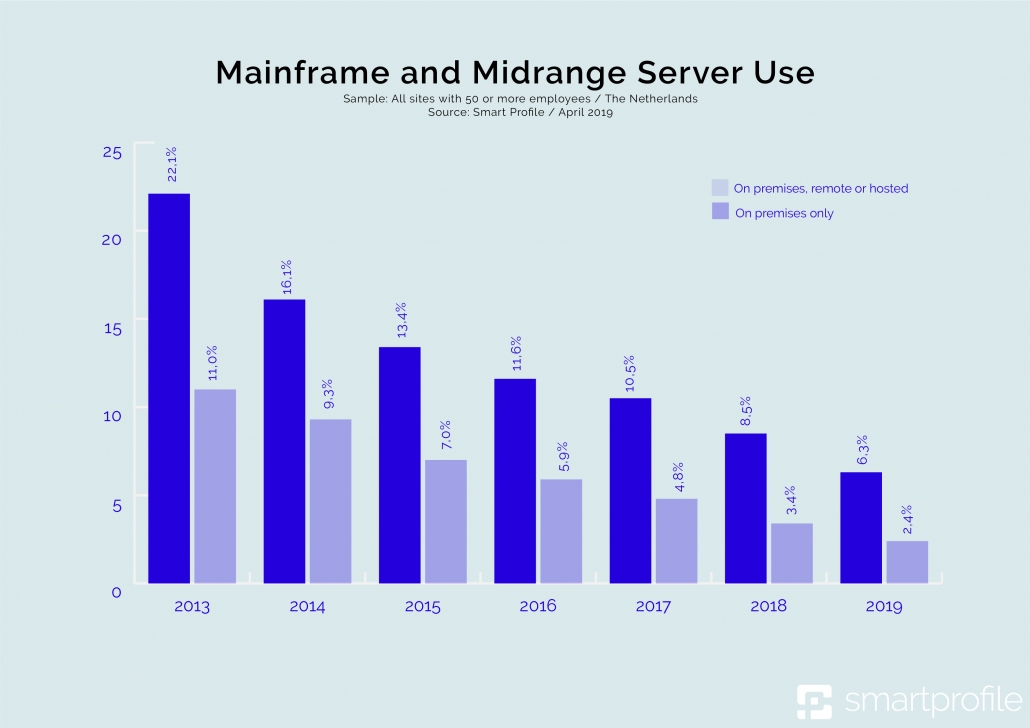 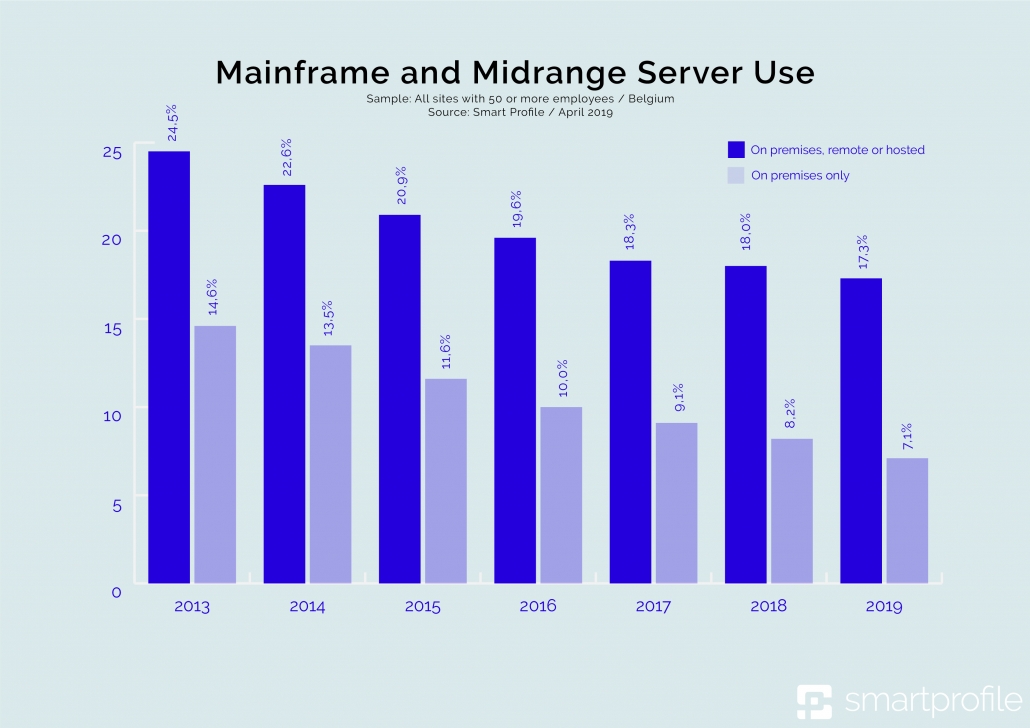 HPE remains the leading server supplier in the Benelux

If you look at the installed base of X86 servers at Dutch organizations, then HPE has had a leading position for years and it is faithfully followed by the second most popular supplier, Dell EMC. Compared to last year, HPE lost slightly, 54.5% against 56% in 2018 and Dell won slightly by 30.6% against 28% in 2018. In Belgium, HPE has an even larger share of the market (61.4 %) and Dell EMC follows with 20.5%. Cisco’s share of the Dutch X86 server market has been steadily increasing in recent years, although it still has a modest share of the installed base at 5.9%. 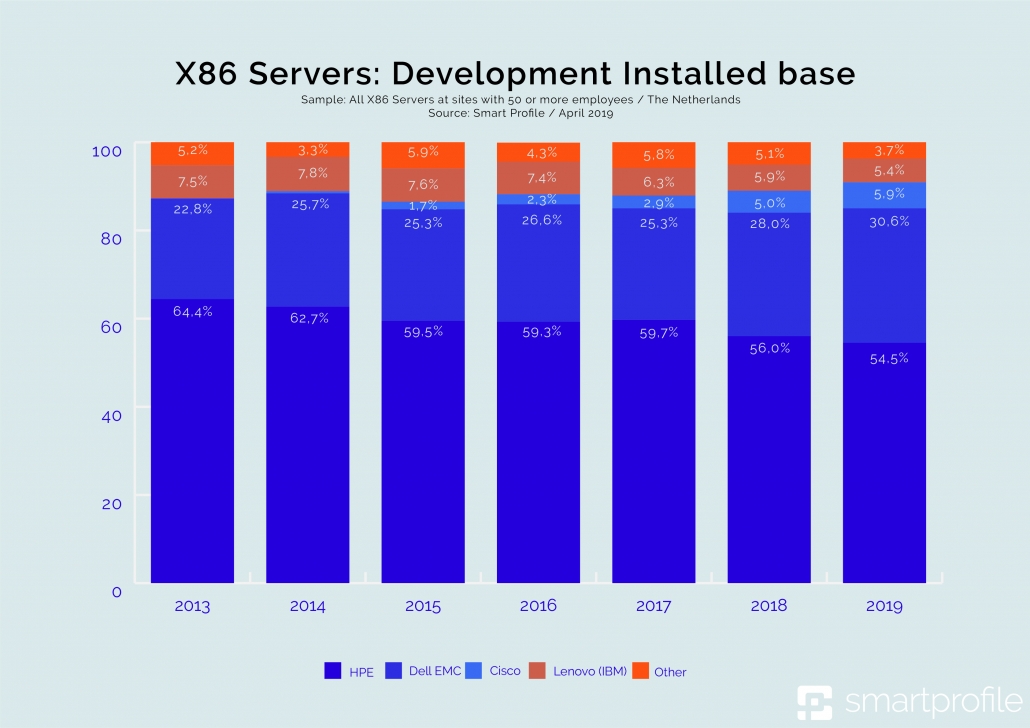 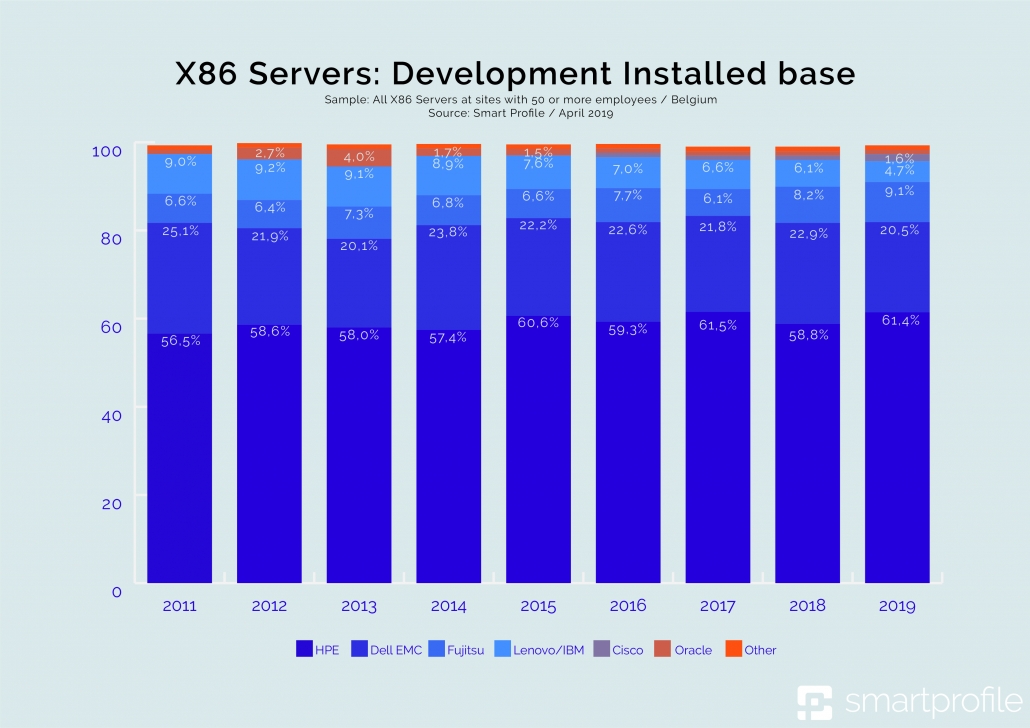 “Dutch companies are clearly opting more often not to keep their servers in-house. Important trends that stimulate this development is the attractive option to purchase server capacity such as IaaS from parties such as Microsoft and Amazon. This is also confirmed by our recent research into the cloud market, “says Sander de Bont, Cloud Sales Expert at Smart Profile. “Companies also opt more often to outsource the management of the servers to specialized hosting (parties). At Belgian companies we see that they are more conservative when it comes to outsourcing their servers. This choice may be motivated because there are fewer specialized parties in Belgium that are focused solely on offering cloud capacity. ”

Cisco continues to dominate the Dutch market for network equipment

Hardware usage in Belgium: has the rise of the laptop stopped?tuit?
Scroll to top
Stay up-to-data?Subscribe to our newsletter and receive monthly tips, tricks, and updates about our new products and services to improve your marketing and sales.