You are here: Home1 / Analytics papers2 / Belgium3 / Hardware usage in Belgium: has the rise of the laptop stopped?tuit?

Has the rise of the laptop stopped?

The desktop is still the most used end-user system in Belgium. The silent rise of the laptop seems to have come to an end now, since the share of laptops is almost the same in recent years. The business use of tablets is  declining. The rapid increase in the use of Windows 10 as an operating system is striking. This is the conclusion of a Smart Profile market analysis, in which 4,552 Belgian companies with more than 50 employees were interviewed. This analysis has also been published by Computable Belgium.

Of the total number of end-user systems, the desktop still takes the lead with 56 percent. This is a very small decrease compared to a year earlier (57%). The increase in the number of laptops, measured since 2011, seems to have stagnated over the past two years. There is a 35 percent share in both 2018 and 2019. After a temporary increase since 2013, the number of tablets as an end-user system is decreasing very slightly (from 2% to 1.8%).

The number of companies using desktops has fallen in the past year from 92 percent in 2018 to 89 percent in 2019. It is striking that desktops are used most frequently in the manufacturing sector (93%) followed by education (92%). In the IT, Telecom & utilities sector, this share is the lowest with 77 percent. In this sector, on the other hand, laptops are used most (95%). The differences in this area of ​​research are not that great: only the transport sector scores considerably lower with 86 percent use of laptops than the other industries. 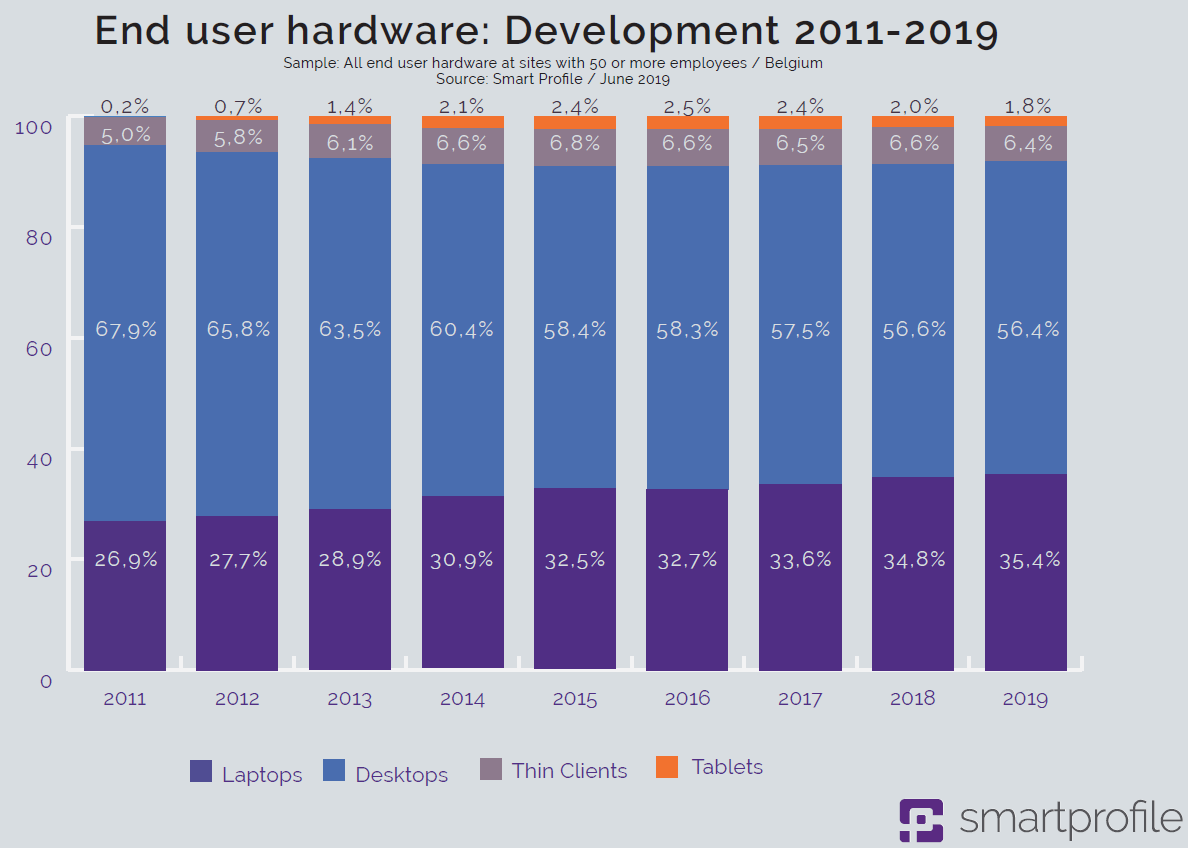 Again a decrease in the business use of tablets

The business use of tablets shows a decrease just like last year. In 2016, 27 percent of companies used a tablet, this number decreased to 22 percent in 2018 and is only 19 percent in 2019. The public sector is an exception. Although there is a slight decrease, penetration is still 28 percent. The largest contraction can be seen in the financial & business services: from 33 percent in 2016 to 18 percent in 2019.

Just like previous years, Apple’s tablets are the most popular. The manufacturer’s share only slightly decreases from 66 percent in 2018 to 65 percent this year. Samsung is on the rise. The share of business tablets from the South Korean vendor is increasing by 5 percent compared to a year earlier. Particularly in health care, a striking amount of use is made of the tablets from Samsung (60%) and much less from Apple (28%). 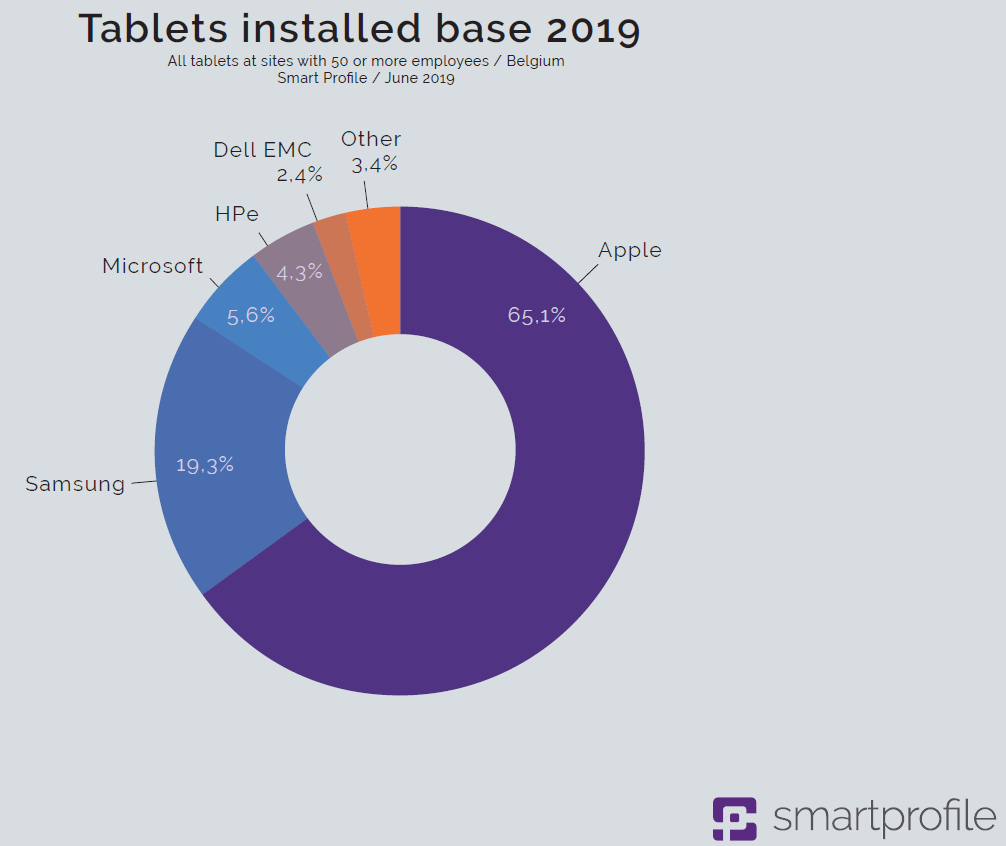 Strong increase in the adoption of Windows 10

2019 seems to be the year of the breakthrough for Windows 10 as an operating system. In 2018 48 percent of the companies used Windows 10, in 2019 this increased to 67 percent. With this, Windows 7 is on its heels, which remains one of the most installed operating systems after 71 percent. The IT, telecom & utilities sector (82%) and education (80%) are at the forefront, while health care (56%) is a strikingly lagging behind. Windows XP (3.9%) is also used the most in this sector. 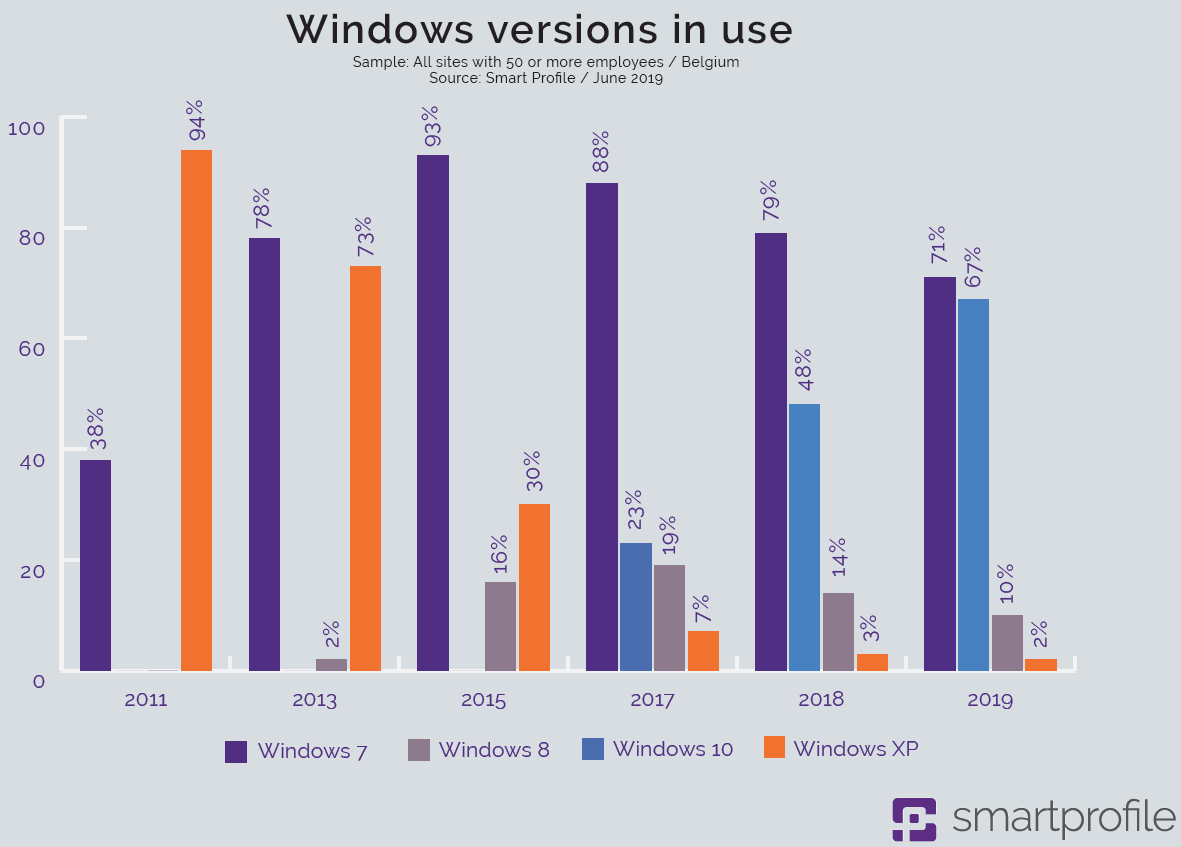 Decline in the use of on-premise servers continues