Decrease in Belgium is less rapid

In the consumer market, many young users no longer know what a (desktop) computer is. Here the laptop and the tablet prevail. The desktop also continues to lose ground in the business market in the Netherlands. In 2018, Smart Profile found that in the office environment, only 41 percent of end-user systems are desktop PCs. In 2010, that percentage was still well over 70 percent.

Decrease in Belgium is less rapid

This decrease in the number of desktop PCs is much stronger in the Netherlands than in our neighboring country Belgium. Whereas both countries were at a comparable level in 2011 (66-68%), Belgians are still at a 57 percent market share for desktops. In particular, the tablets and thin clients are even less common at our southern neighbors. It is also striking that in 2011 the share of laptops in Belgium was 26% a lot higher than ours (19.9%), but now only 1% higher (34.1% compared to 33.1%).

The space that the desktop in the Netherlands loses is taken up by the laptop and the tablet. The thin client remains stable. In 2018, tablets will make up around 7 percent of all business end-user hardware, laptops around 33 percent and thin clients around 19 percent. 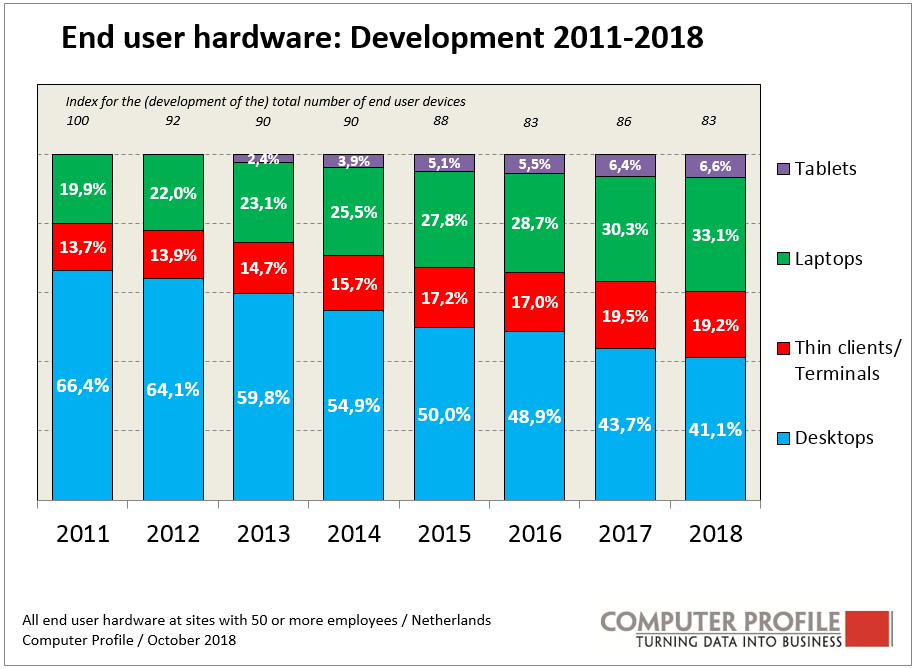 Although the desktop PC has been declining for quite some time, it is still the largest category. Of all the business locations interviewed by Smart Profile (with 50 or more employees), 72 percent say that desktops are still in use. The trend line of recent years is also clearly decreasing for the penetration of desktops. In seven years the percentage of sites with desktops has fallen from 93 percent to almost 72 percent now. This, while the percentage of locations where laptops are used is now 81%. The penetration of thin clients and tablets at the locations surveyed is 36% and 31%, respectively.

Desktop PCs are still used there at 54 and 52 percent of the locations respectively. Desktop penetration is highest in education and industry, with 85 and 83 percent the highest. 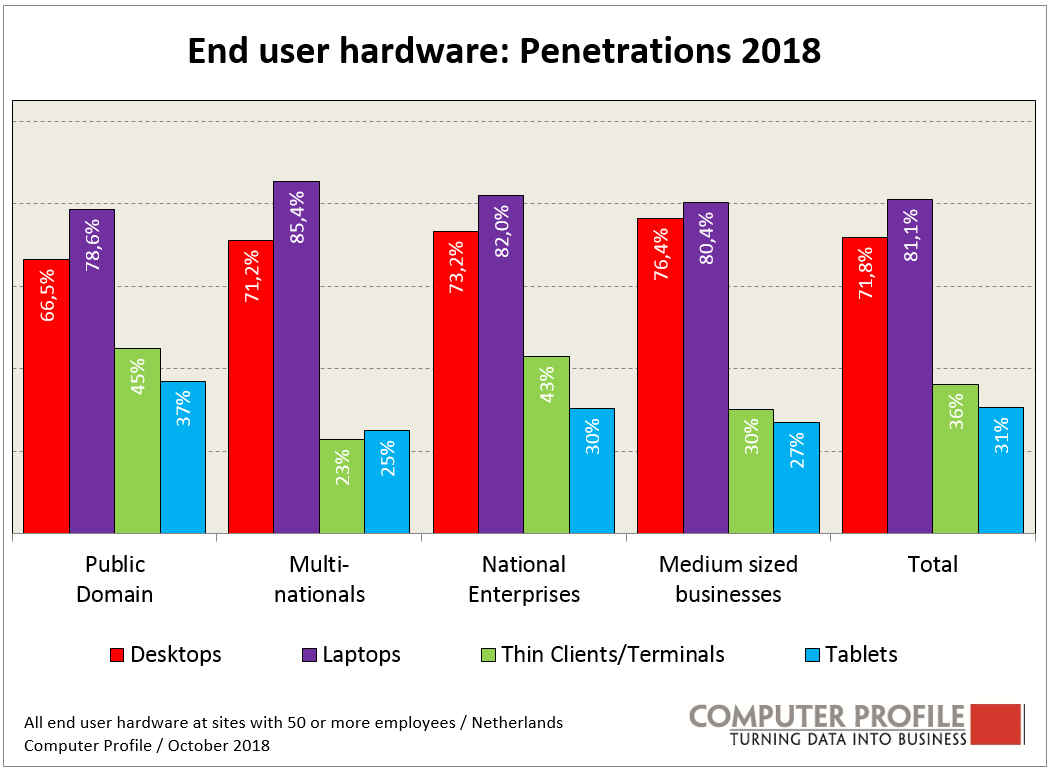 The advance of the thin client seems to have come to a halt this year. For thin clients large differences are visible between the different market segments. The highest use is in the government and in the healthcare sector, with 63% and 71%. The sectors where thin clients are clearly the least popular are education, where 13.5 percent of the locations indicate that they use this type of hardware and the ICT & Utilities sector with a penetration of 21 percent.

The business usage of tablets is mapped by Smart Profile since 2012. Initially, the percentage of locations with business tablets increased fairly quickly, but now it appears that this has reached the top. Business tablets are in use at approximately 31% of locations. It is striking that in the public sector the tablet scores above average with 47% in the government and 37% in the healthcare sector. Tablet penetration is the lowest in the transport sector and in industry (21 percent each).

We find a relatively limited number of players in the end-user hardware market. For tablets, the Dutch business market is currently led by Apple’s iPads. Approximately 85 out of 100 business tablets are from Apple. Samsung and Microsoft are the numbers two and three. Compared to last year, Apple’s share has even increased slightly, at the expense of numbers two and three. 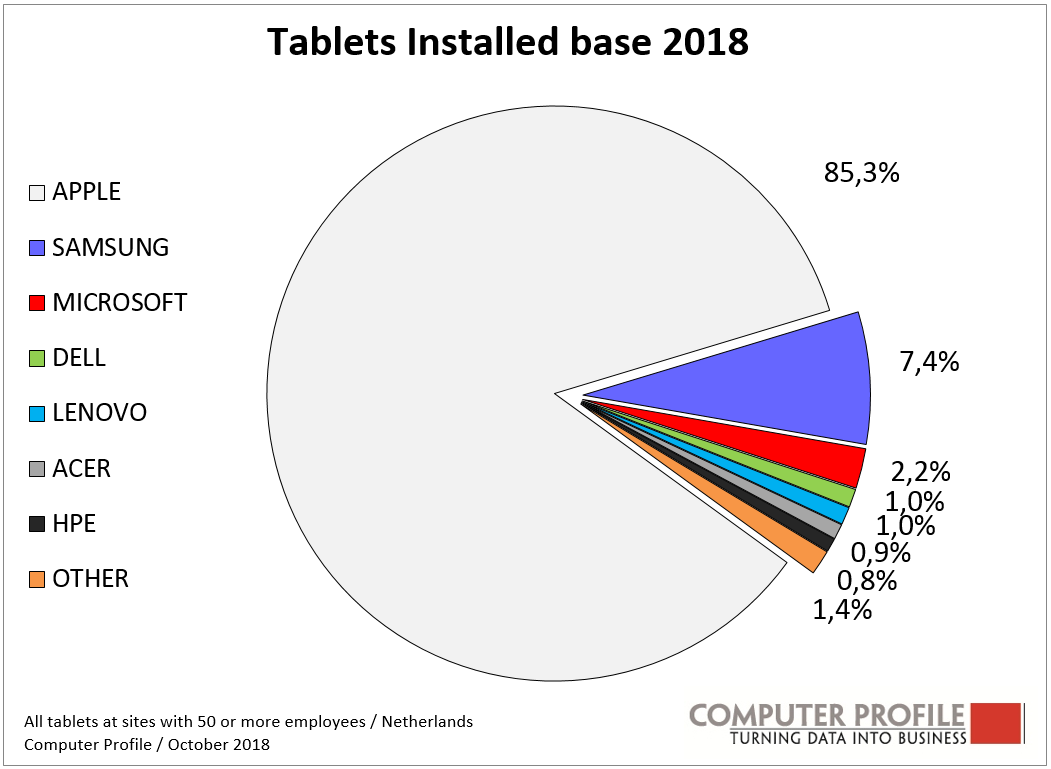 Desktops and laptops are for the most part supplied by the same manufacturers and are therefore shown together in the figure. Of the total number of desktops and laptops that Smart Profile finds, the majority (47 percent) consists of HP systems. After HP, the desktops and laptops from Dell, with a share of 34 percent, form the second largest group. Lenovo remains the stable number three on the Dutch market.

The last 8 years there have been hardly any shifts in the installed base market share for HP and Dell. 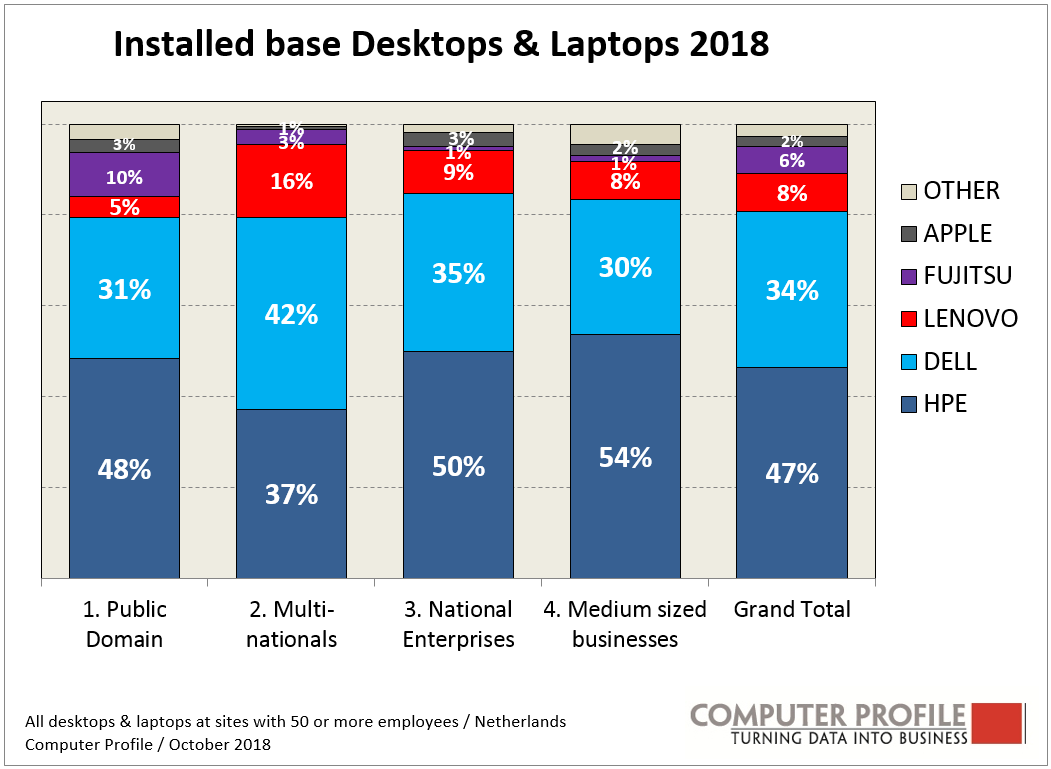 Veeam remains the undisputed leader of the backup market
Scroll to top
Stay up-to-data?Subscribe to our newsletter and receive monthly tips, tricks, and updates about our new products and services to improve your marketing and sales.