You are here: Home1 / Analytics papers2 / the Netherlands3 / Veeam remains the undisputed leader of the backup market

Veeam remains the undisputed leader of the backup market

Veeam’s growth in the Dutch market does not seem to stop. The share of the backup supplier increased by 7.6 percentage points to a whopping 40.5%. This emerges from a Smart Profile analysis of more than 3,500 conversations with Dutch IT managers about the use of security hardware and software. McAfee is still the most used end point security application, but is showing a declining market share. The rapid growth of Microsoft is special in that market. Cisco is the clear leader in the field of security hardware, with 68% market share.

The Swiss Veeam has been able to further strengthen its position with the increasing popularity among Dutch companies. With 40.5% market share, it leaves the numbers 2 and 3, Veritas (17.1%) and Commvault (13.8%) far behind. If it is up to Veeam’s founders, aggressive growth will continue. 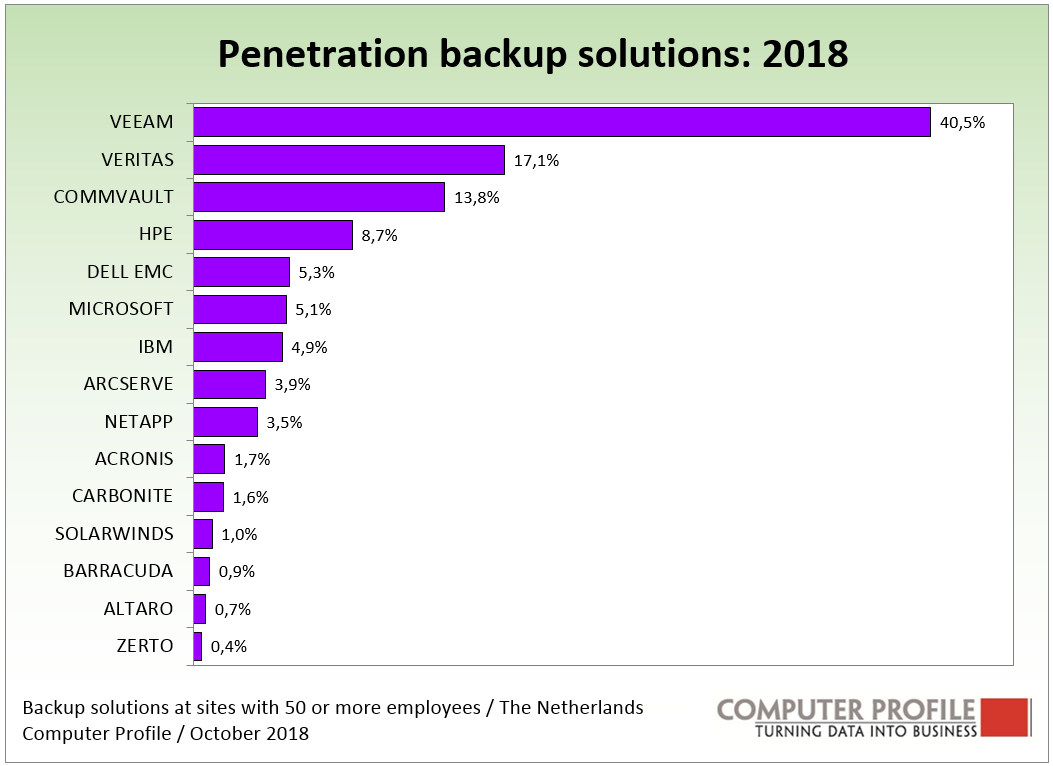 Veeam leaves the other vendors far behind in all market segments distinguished by Smart Profile. Only at multinationals a solution from Commvault is used a little more often. The top 3 in all sectors consists of Veeam, Veritas and Commvault. Only in small and medium-sized enterprises does HPE succeed in securing a third position with 7.2 market share. We only see Commvault in that market in fifth position. 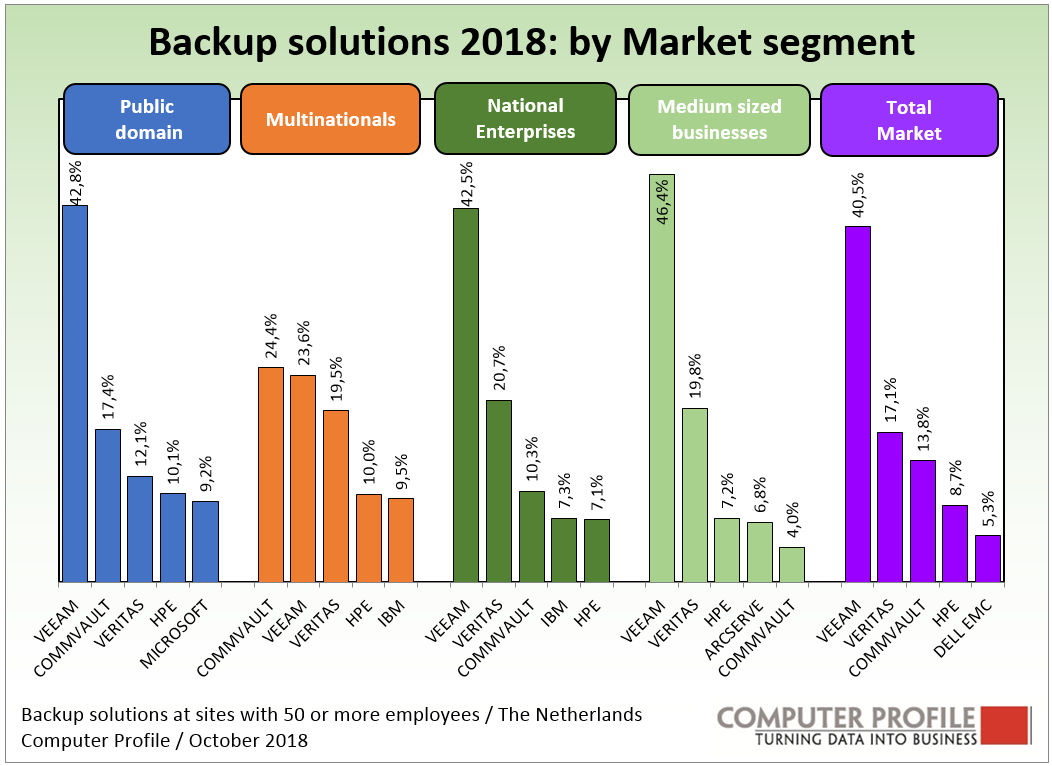 Although McAfee is still the most used end point / antivirus solution among Dutch organizations with 24.8 percent, market share has fallen slightly by 2 percentage points last year. Perhaps the expansion of the MVISION portfolio can change this. The second position is taken by Symantec, which achieved very slight growth and now has a share of 19.7%. And where the number 3, Trend Micro experienced a modest increase to 14.8%, Sophos lost something and still holds 13.3% of the market.

It is striking that where ESET (7.2%) over the years shows steady growth, Microsoft, as the 6th supplier in the Netherlands, occupies an increasing share of the market for workplace protection in a relatively short period of time. For example, 6.6 percent of the workplaces listed are now protected by a Microsoft application, while in 2015 this was only 0.9 percent. This is partly due to the fact that Windows 10 contains an integrated antivirus solution. Some organizations believe that this solution is adequate and choose not to install an additional antivirus application.

Kaspersky (4.5%) and F-Secure (2%) both lost market share compared to last year. At Kaspersky, this may be a result of the government’s decision to stop the supplier’s security software. Although an earlier analysis showed that the company has enough users in other sectors, it is expected that it will overcome this blow. AVG Tech and Bitdefender both account for 1.3% of the market. The top ten regarding workplace security market share in the Netherlands is completed by Fortinet (0.8%), SentinelOne (0.7%), G Data (0.6%) and Norman (0.5%). 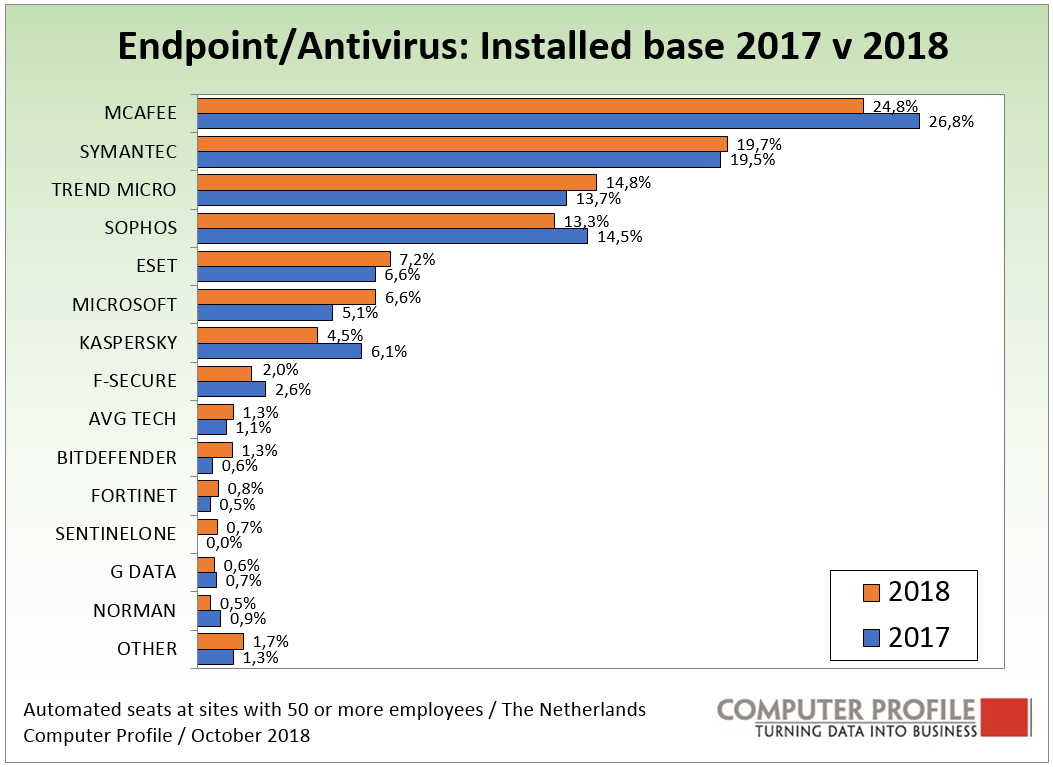 Sophos dominates with regards to governmental organisations
Smart Profile also investigated the use of end point / antivirus solutions per sector. The three largest parties, McAfee, Symantec and Trend Micro, do not take the lead in every sector. With 24%, Sophos is the strongest party in the government market. Trend Micro leads the healthcare market with almost 40%, but Sophos follows here with 22.7%. It is striking that Symantec does not yet have a 5% market share in healthcare, which is immediately the smallest market of the supplier. Symantec remains the most used solution in education where Trend Micro is almost invisible at 0.5%. 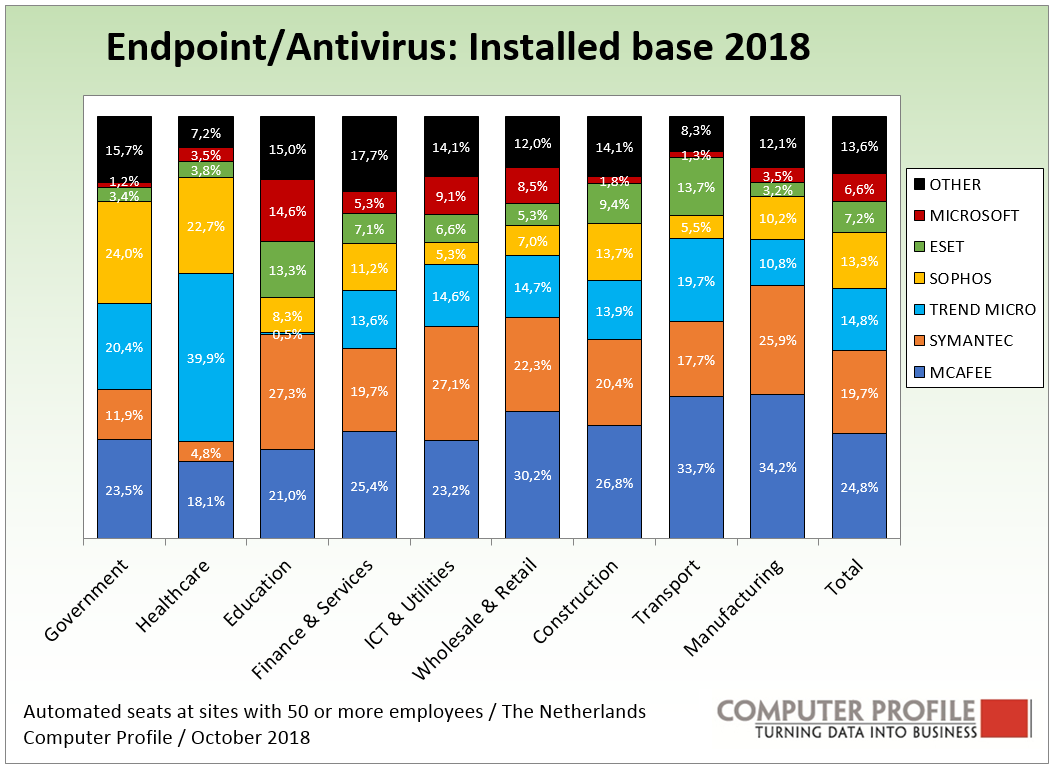 Organizations that take security measures by installing hardware solutions most often choose Cisco. The obvious leader has a whopping 68% market share. Nevertheless, Cisco’s position has weakened somewhat in recent years. In 2014, 74.1% of Dutch organizations still used Cisco hardware security solutions. Yet other suppliers do not yet know how to get close. The number 2, Fortinet saw the market share grow by 1.3 percentage points, but it brings it to just 6.6%. The number 3 Juniper dropped 0.6 percentage points compared to last year and finished at 4.7%. 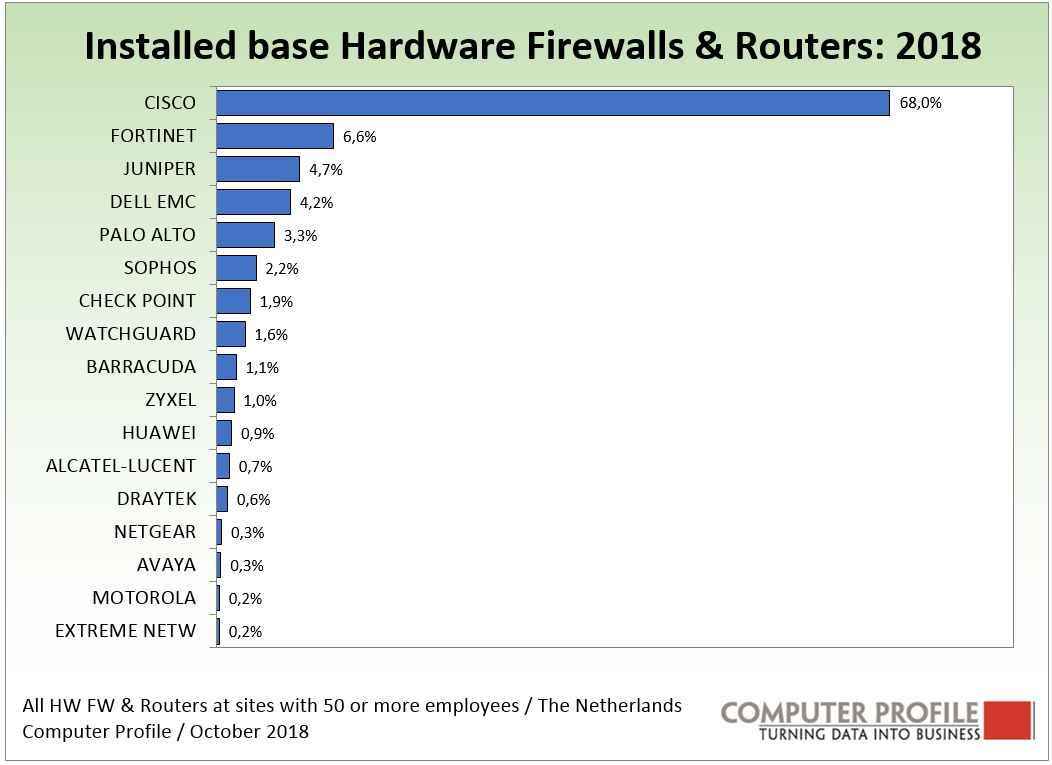 Marketing about sales: “We are talking, but are not yet on the same wavel...
Scroll to top