You are here: Home1 / Analytics papers2 / the Netherlands3 / VMware by far the largest in the server virtualisation market

VMware by far the largest in the server virtualisation market

Over three-quarters of all businesses with 50 or more employees make use of server virtualisation. The most common solution for Server Virtualisation is VMware (75%). Then comes Microsoft with 17 percent and about 7 percent of the inventoried solutions are from Citrix. In the past year, the share of VMware has increased by approximately 2.5 percentage points and that of Citrix remained approximately the same. This can be seen from the analysis by Smart Profile of approximately 6,200 interviews held with IT managers of businesses with 50 or more employees about the infrastructure used. 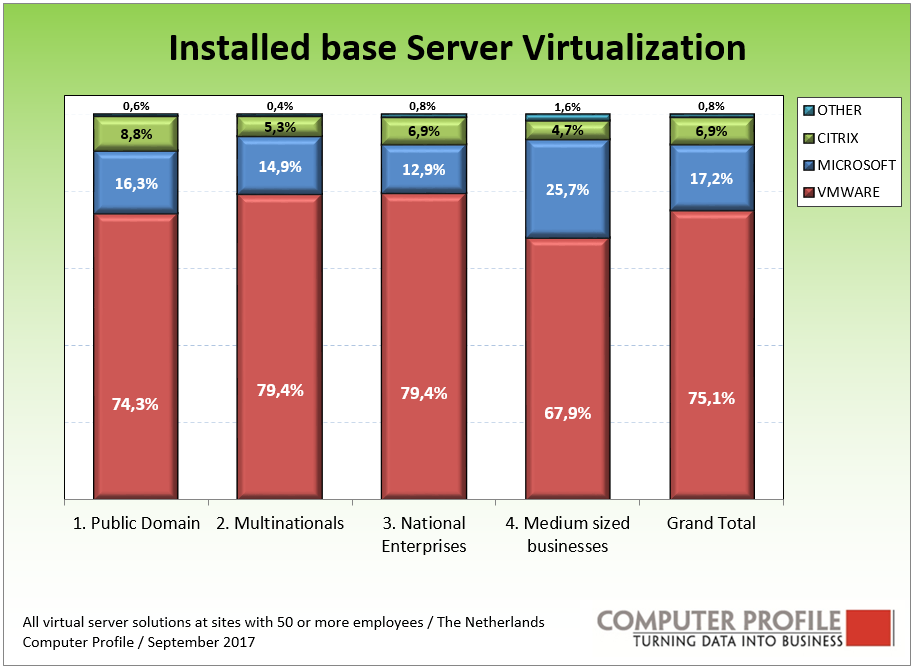 The differences between the different market segments are relatively small. Citrix seems to have its strongest position in the public domain, while that of Microsoft is just in companies in the medium-sized businesses segment (in The Netherlands, 50 to 250 employees).

The most widespread use of server virtualisation software is to be found among public administrations – in about 94 percent of locations. This is followed by healthcare and education, with 87 and 83 percent respectively. It is used least in the transport industry – here, about two-thirds of the locations indicate that they are using server virtualisation. 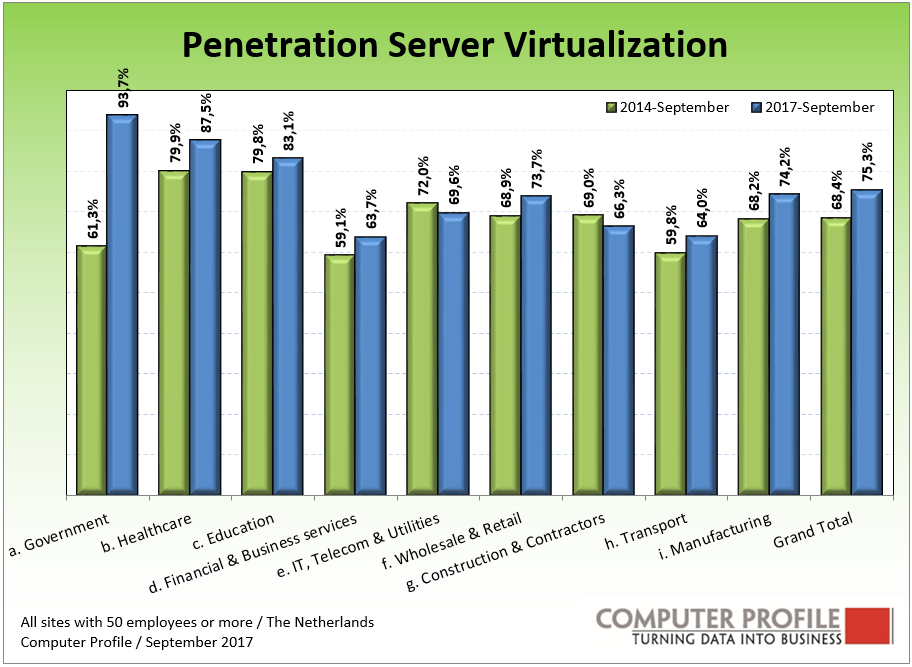 The use of virtual desktops has grown rapidly over the last five years, but is now levelling off. In 2013, just under 10 percent indicated that they had solutions for desktop virtualisation. That number had already doubled in 2015 and in 2017 it had risen further to nearly a quarter of the locations. In a number of segments its use has doubled or tripled. The fastest rise is to be seen among public institutions and business locations within the financial services sector. 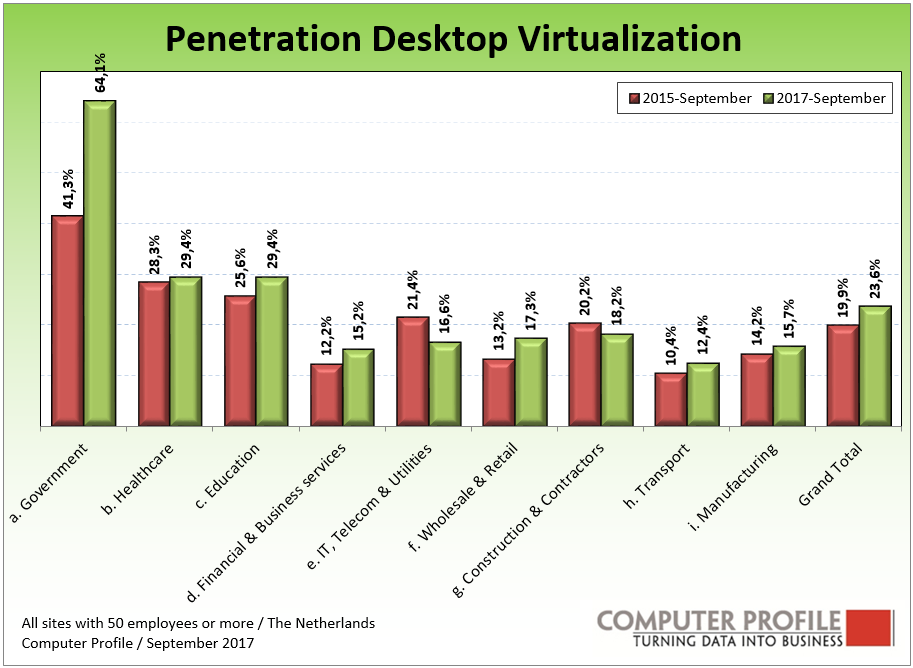 With segmentation into types of employees we can see a decided increase in the use of virtual desktops. Penetration is the highest among the larger organisations. Thus, the penetration of the use of virtual desktops among companies with 200 to 500 employees is about 30 percent (this was still about 20 percent in 2014), about 41 percent among those with 500 to 1,000 employees and 40 percent among those with more than 1,000 employees. Among the somewhat smaller locations – those with 50 to 100 employees – its use is the least widespread at about 16 percent of locations. In the remaining segment, 100-200 employees, that figure is 23 percent.

Whereas VMware is the most common solution in server virtualisation, Citrix software is the most common in desktop virtualisation. More than six out of ten inventoried solutions for desktop virtualisation involve a Citrix application. Citrix has its strongest installed base share – more than 70 percent – among locations of multinationals. With 36 percent, VMware is fairly widespread among institutions in the public sector. With over 12 percent, Microsoft – the overall number three – seems to be used mainly among medium-sized businesses (50-250 employees). 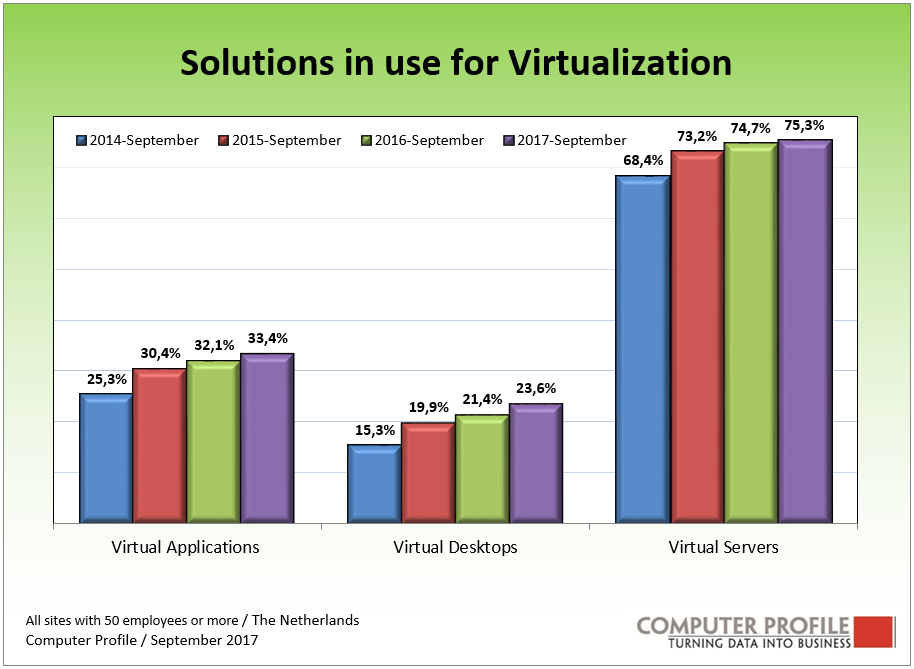 Microsoft continues to increase its lead in the Unified Communications mar...

Adoption of virtualisation solutions seem to be stagnating in Belgium
Scroll to top
Stay up-to-data?Subscribe to our newsletter and receive monthly tips, tricks, and updates about our new products and services to improve your marketing and sales.