You are here: Home1 / Blog2 / Hilly about 25 years of Smart Profile

Hilly about 25 years of Smart Profile

This year, Smart Profile celebrates its 25th anniversary in the Benelux. Of course, we want to celebrate this milestone. I have been working at Smart Profile (then Computer Profile) since 2005 and was asked to share something fun from the years 2006 to 2011.

In the year 2005, I started my adventure at Smart Profile. After looking after the children at home full-time, I followed a reception/administration reintegration course and ended up at Computer Profile via Markkant personeelsdiensten.

Computer Profile was then still located on the Saksen Weimarplein. On the ground floor was the office manager, at the time Margje (covered in the previous blog), and the support team to which I was added. There were three of us in the support team, former colleagues Gettje, Viola and me. In my job, I had various roles: Hospitality, Facility, administration and a tiny part of sales support, and Gettje and Viola had their roles entirely in sales support. So I worked in a small but close team. 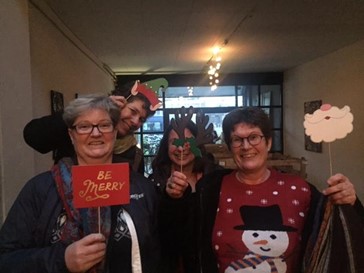 I went through two renovations on the Saksen Weimarplein, as the company’s constant growth meant we needed more and more space. I enjoyed that time, the growth of togetherness; you go through all kinds of things together, you have to get everything done together. It is nice to see a company grow like that and to be part of it.

A good memory is Computer Profile’s 10th anniversary, which was a huge event. A big event with lots of fun activities. We had a lovely party in the Grote Kerk in Breda. I also really enjoyed all the quarterly drinks/Christmas drinks we’ve had over the years, where we always did different activities or workshops. I liked the fact that there was always attention paid to that as well. And still do, for that matter.

We also had a ”take your dog to work” day in the past. We did that for two years. That was in the old building. I guess those last two years. I don’t have a dog myself, but for the owners who took part and their “kids”, it was a party! It was a bit of chaos. In the afternoon, peace returned because then they went into the woods with the dogs. There were some accidents here and there! Here, on our still “fairly new” location, Michiel would probably not dare to do it (yet), haha.

After I had been away for six months, I was, fortunately, able to come back to Computer Profile. There were some changes then. The support department became more integrated with sales at a certain point, so they started working in the same department/floor. Margje got other roles and also moved upstairs, so the rooms downstairs were then used for meetings and the reception desk, my place. In the beginning, it took some getting used to not being among other colleagues, but during the day, people regularly came downstairs for appointments, office supplies, lunch or a friendly chat! 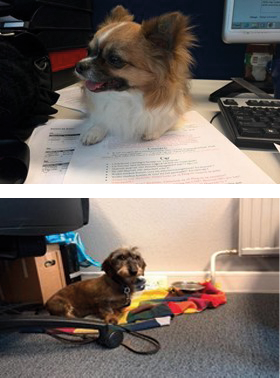 I think that those years were characterised by growth. When I started, we were a small team of about 20 employees. The number of people who began calling for the campaigns and the database caused a significant increase in colleagues. In the beginning, marketing was also done by the management itself, but at a certain point that was also outsourced. The sales team also grew with a large number of new employees. And the founding of Fleet Profile was also an important pillar, where we started to focus on the automotive market and the IT market.

Due to the growth in the number of people, the “lunchroom” really became too small. After the 2nd renovation, we had a canteen where we could have a pleasant meal, relax, the lunch groceries were delivered weekly, the table was set every day, and we had lunch in a homely atmosphere!

Of course, data and information are constantly changing. I think we will be serving more and more different market sectors. Smart Profile will continue to invest in the growth and quality of its products and the quality of customer satisfaction.

This will keep us interesting in any case, but Smart Profile will also continue to grow both nationally and internationally!

Why less leads to more

It is all in the data
Scroll to top
Stay up-to-data?Subscribe to our newsletter and receive monthly tips, tricks, and updates about our new products and services to improve your marketing and sales.