It is all in the data

This year, Smart Profile celebrates its 25th anniversary in the Benelux. Naturally, we would like to take a moment to celebrate this milestone. I have been working for Smart Profile (then Computer Profile) since 2009 and was asked to share my story.

I joined Smart Profile (then Computer Profile) in the summer of 2009. Smart Profile was a shareholder of the company I used to work for. There I was already working with the data from Smart Profile.

Every month, we received a new CD in the mail containing a copy of all the IT data we used to analyse Smart Profile. On occasion, I had also visited Smart Profile’s old office to see where our data came from.

Unfortunately, in 2008 the financial crisis started, and many of our clients operating in the IT market put their foot down. So it all went downhill pretty quickly for the company, and the first people were laid off in 2008, and the rest followed in 2009. The curtain fell for me too, and I had to look for a new challenge. 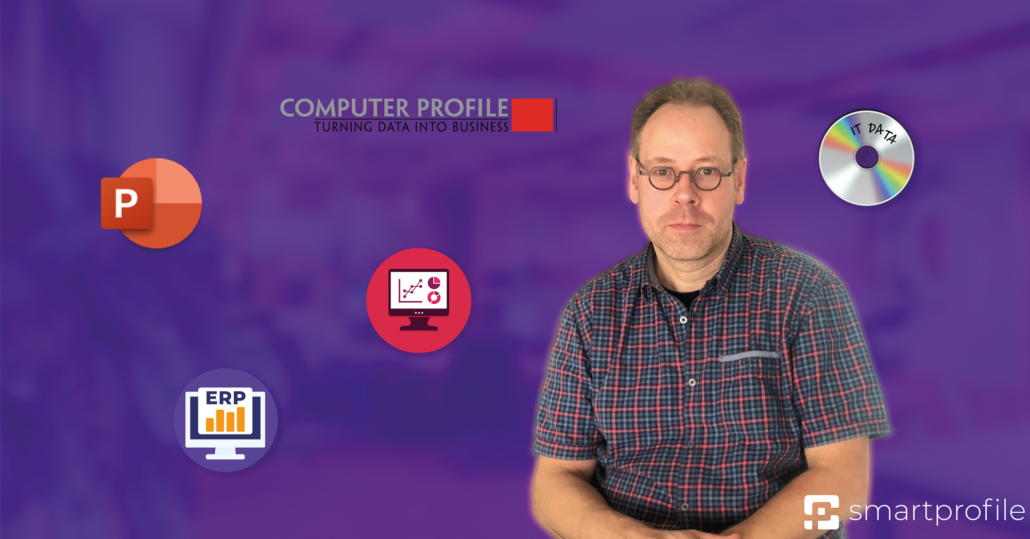 Rogier, a former colleague from the time we worked together at Heliview, was working at Computer Profile as Sales Manager. I still played squash with Rogier, and he would sometimes tell me about his work. Rogier suggested that I go and talk to Smart Profile since they were looking into doing something with analytics internally.

My old employer had previously fulfilled that role for Smart Profile, but of course, that stopped. And Smart Profile was looking for a new partner. On a Friday afternoon, I visited Harry and Michiel at the office. I went into the meeting room at 3 o’clock and came out at half-past 5.

The next day, because that’s Michiel, he had already drawn up an employment contract. So that was funny.

The idea was, and is, that if you have customers who buy a database or do Tele campaigns, other questions will always come up. Such as ”I’m doing this with you, but I also have a number of research questions. Can’t I have that done through you as well?” SAP did that, for example, but I have also investigated research questions for RICOH or ATOS.

I am also a kind of sales support. In preparation for larger meetings, for example, if we went to SAP, then overviews were made, or other results were visualised. So the insights that we often sell are also used in presentations when you go to a prospect or customer and want to do more business.

We also did this a bit to show that we are not just a flat data organisation. It’s not that we only deliver lists, but we also turn them into intelligence. That has been our speech from the beginning. The extra added value/intelligence.

I think we started using dashboards in 2012 with the predecessor of PowerBI, which was still PowerView at the time. You could do that in two ways: in Excel files, or you needed a separate BI tooling for that. Everything in PowerView was a bit more cumbersome and involved more. PowerBI makes it more manageable for the end-user.

I started on my own in the Analytics team, and now I’m on my own again. Haha, but I need to explain that. When I began my time at Smart Profile, there was only a Business Development Center, Sales Department and a Support Department. Now we also have a Products & Services circle and Smart Profile Labs (the innovation department). The people in these circles do many things that used to be handled by Analytics.

WHAT MAKES YOUR WORK SO ENJOYABLE?

What makes my work interesting is the diversity of questions that come to an analytics department. One time it is something to help sales with a customer question, the next, it is a CRM project with a lot of matching, and the next, it is something with the media. I also deal with many different roles in the organisation, such as Products and Services, Smart Profile Labs, Demand Generation and Marketing.

In 2011 or 2012 and shortly after that, we received a request from SAP to identify trends in business applications. After sharing this document with the marketing department, they asked us to present these findings at an event for SAP resellers. That took place in a castle in Sint-Oedenrode. Michiel and I went there together, and there was a big dinner, including a presentation and a wine tasting.

There we were on the stage presenting the developments in business intelligence, ERP and Finance. There was a perfect response to this. Subsequently, some customer contacts were established and renewed. For instance, Exact asked if we could help them with market intelligence. First for the marketing and sales team, then at the board level and finally at the partner event.

Then you notice that you are kind of away from the operational level. And it is also nice that you come into contact with the higher ranks of the organisation because they look at information and data differently. At least, in hindsight, I liked it, because the moment you are in front of a large group, it is pretty exciting. Now that it’s over and relatively all went well, you look back with pleasure, and that is ultimately the most fun.

I think there will be more compartmentalisation and specialisation like with the Smart Profile Labs team. This innovation department will only continue to expand. For example, we will invent even more ways to collect information and to use this data in ever more different ways.

I also think that there will always be a market for Demand Generation, although this branch will be further apart than Labs. So I think the organisation will split up a bit more. Marketing and Customer Service will still be part of the general organisation, but there may be a separate director for Labs and Demand Generation.

Did you find Erik’s blog interesting, and would you like to stay informed about our latest updates?

Hilly about 25 years of Smart Profile

25 years of smart profile and the future
Scroll to top